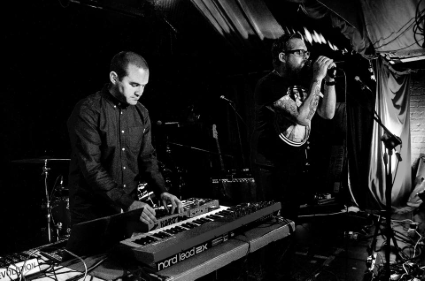 Analogue Wave is an Irish-based electronic duo, mixing dub and electronica with breakbeats, vocals and synths. After a three-year hiatus, the band have returned to the underground scene with a brand new single ‘Hope’. This is a sonic call to arms in a world spinning wildly out of control, both politically and climatically, with no hope of a positive ending in sight. Imbuing and poignant, this track has a timely message.

Listen To ‘Hope’:
“Hope is a sonic reaction to both the political and climatic turmoil currently threatening modern life as we know it,” explains vocalist Del Chaney. “It was written under the shadow of the farcical US presidential elections and the current fallout from Brexit.”

The duo consists of Del Chaney (vocals/songwriting) & Andy Sneyd (songwriting/production). They have previously released two full studio albums, their debut release ‘N.l.G.w.V’ in 2013 and their full-length sophomore release ‘Casimir’ in 2014. They have also had their music remixed by artists such as Ummagma, InViolet, Grim, Four Point Zero and Temperance, releasing an impressive remix collection ‘Alterations’ in 2015.

In late 2013, The Guardian highlighted Analogue Wave as an emerging band to watch, underlining their mix of electronica, dubstep, synths and breakbeats. Their debut album was album of the week on RTE 2FM, ranked at number 11 in Dan Hegarty’s ‘The Alternative’ (RTE 2FM) Top 50 alternative Irish albums of 2013, with the ‘Casimir’ album ranked at number 31 on the same list in 2014. They have played live at many of Ireland’s boutique music festivals, live radio studio sessions, some of the country’s best live venues, as well as many impressive underground raves.

The ‘Hope’ single is accompanied by two remixes. The first remix of ‘Hope’ was created by Tuath, an Irish experimental psych/kraut collective, who have twisted the single into a sprawling wave of atmospheric neuro funk, peppered with drum and bass/jungle algorithms.
Watch ‘Mezkal’:

In the second, celebrated Canadian-Ukrainian dreampop duo Ummagma offer up an invigorating drive-filled dance-inducing remix of ‘Mezkal’. The original version of this track was released on the band’s ‘n.l g.W.v.’ debut album. Opening with remarkable groove, great momentum, this remix stands out in its edgy vocals and tasteful layering, with the tension building and releasing nicely.

‘Hope’ is now available digitally via Bandcamp at http://analoguewave.bandcamp.com, and will be followed by the full album release later in 2017.

Analogue Wave sit outside any particular trend and that shows that the Dublin duo have a wide musical radar – Dan Hegarty, RTE 2FM

This is a sound of a band in love with sounds and the possibilities of the digital world – Matt Riches, Puluche Music Magazine

Nuggets of musical gold… clean faultless production… A reggae team of Noel Gallaghers have been sent from a dub/electronica future and have called themselves Analogue Wave… overall most of the world’s population are pleased – Aidan Cuffe, Golden Plec

Analogue Wave effortlessly show how to merge a broad range of musical genres whilst retaining each and every element that makes the group what they are – Keelan Foley, The Irish Music Blog

Keep up with Tuath