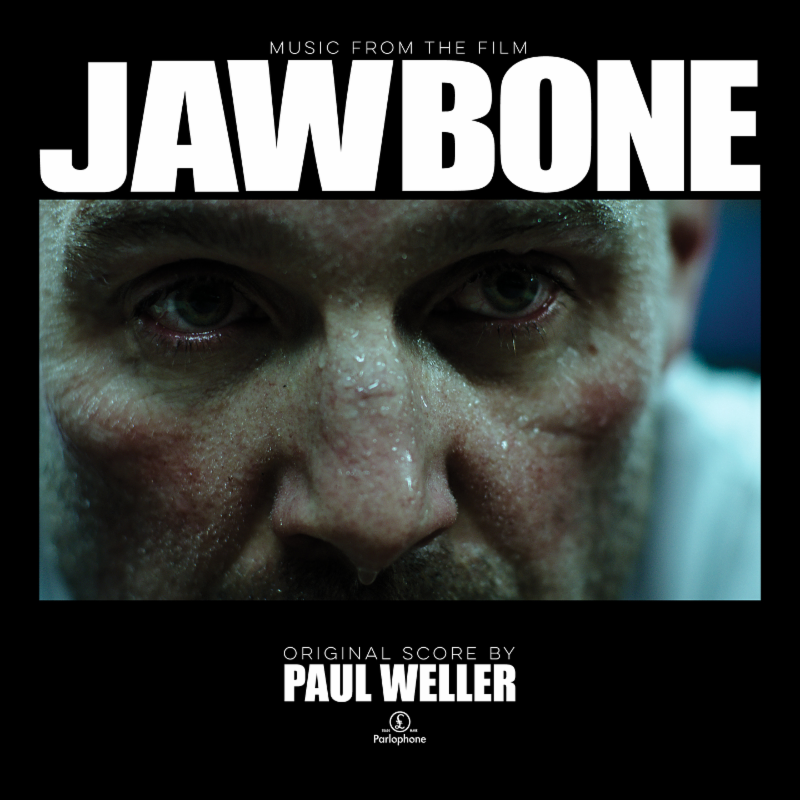 For the first time in his long career, Paul Weller has recorded his first-ever full film score/soundtrack project, entitled JAWBONE: Music From The Film, which will be released on Warner Bros. Records in the U.S. on March 10th. JAWBONE, the film, will be released in theatres on March 17th in the U.K. This is the first new music from Weller since his universally praised 2015 album Saturns Pattern. JAWBONE: Music From the Film will be available for pre-order beginning today via Amazon, iTunes,  Apple Music and Spotify.
The film’s star, writer, and co-producer is the BAFTA-nominated actor Johnny Harris – a long-time fan of Weller’s. He approached the singer a few years ago through a mutual friend on the off-chance he would be interested. However, all that existed at that point was the script – no cast and no budget – but Weller was keen and a great partnership, and friendship, were forged.
“Paul would constantly send through any new ideas, demos, or recordings, and what was unique and beautiful about this approach was that his new compositions were now inspiring and influencing the story as I was re-writing it,” Harris says. “I’d also send Paul new drafts of the script, or any new ideas as they were forming along the way, and a beautifully collaborative process evolved.”
JAWBONE, directed by Thomas Napper, is the semi-autobiographical story of a former youth boxing champion. Jimmy McCabe (Johnny Harris) is a man in search of hope but looking in all the wrong places. When he hits rock bottom, he turns to his childhood boxing club and the only family he has left: gym owner Bill (Ray Winstone), cornerman Eddie (Michael Smiley), and promoter Joe (Ian McShane). Back in training, years after anyone thought he was a contender, Jimmy will risk his life to stand tall and to regain his place in the world.
JAWBONE: Music From the Film will be released by Warner Bros. Records / Parlophone Records on March 10th. The 36-minute, 7- track album will be available on vinyl and digital download in the U.S., and on vinyl, CD, and digital download in the U.K. and features the following tracks:

“Jimmy / Blackout” The album’s sprawling 21-minute opener “Jimmy / Blackout” signals that JAWBONE: Music From the Film is a collection quite unlike anything else from Paul Weller’s extensive discography.An experimental sound collage that provides much of the film’s score and underlying mood, “Jimmy / Blackout” segues across a variety of different and often dissonant tones. Its eclectic tapestry of sounds flourishes and fractures with choral vocal harmonies, bursts of droning guitar, and the swirl of vintage synthesisers.Weller’s inimitable vocal takes on a more ethereal quality when it finally surfaces shortly after the 18-minute mark as the tracks head towards a dramatic crescendo.

“The Ballad of Jimmy McCabe” Second track “The Ballad of Jimmy McCabe” finds Weller in more familiar territory with an acoustic song written in the folk tradition. It’s a song that reflects the situation and emotional turmoil that troubles Johnny Harris’s lead character.As Weller sings:  “I’ll beat my head ’til dawn / Figure out what I’m running from / Only then will I find peace in me.” A closing snippet of dialogue from the film offers a further insight into Jimmy’s desperate state of mind.

“Jawbone” Commencing with almost completely different sounds emanating from each speaker, the film’s title track is an aggressive, guitar-heavy psychedelic instrumental that feels like a hazy jam session straight out of the late ’60s. Again it features dialogue taken from the film, this time between Jimmy and his trainer Eddie (Michael Smiley).

“Bottle” Recalling “The Ballad of Jimmy McCabe,” “Bottle” is even more reflective in nature as Weller channels the spirit of a character who has descended to a new low and asks: “Where is the man I was?”

“Jawbone Training” While training scenes are often accompanied by inspirational chest-beating anthems, Weller takes an entirely different approach. This jazz-infused piece plays around a core percussive motif that builds with an intensity that echoes an escalating heartbeat. Dialogue comes from Ray Winstone as gym owner Bill, who offers Jimmy some ominous advice.

“Man on Fire” “Man on Fire” is the closest that the Jawbone soundtrack comes to a traditional score, with a minimalistic production that sets mournful strings to a plaintive piano.

“End Fight Sequence” Like “Jawbone Training” before it, “End Fight Sequence” also presents an antidote to the expected conventions of a boxing film. An almost hypnotic beat provides the basis for this foreboding album closer, as the track’s layers of sound become more cacophonous and unpredictable before drifting into silence.

Expect plenty of PAUL WELLER news to follow shortly including details on his forthcoming studio album.