PERFORMING SONGS OF
THE BLACK CROWES AND MORE

Following the roaring success of four back-to-back sold-out dates at The Gramercy Theatre in New York over the weekend, The Magpie Salute have announced their debut UK performance at London’s Under The Bridge on April 12th. To coincide with the announcement, Planet Rock have today premiered a brand-new clip of the band performing ‘War Drums’.

Presale tickets to the show will be available exclusively through Planet Rock, The Magpie Salute, and Under The Bridge this Wednesday 25th at 10am. Tickets will then go on general sale this Friday 27th at 10am and will be available through Ticketmaster.

“The name The Magpie Salute comes from a superstition based in the UK,” explains Rich about the band’s moniker. “There are many variations, but the version I’m drawn to is the belief that if you see a Magpie, you would do well to salute it to ward off negativity, or to have a good day. The way you salute the Magpie, based on some traditions is to say ‘Good Mornin’ Captain.’ The reason we salute is to show we’re unarmed, or what I like to say is ‘we come in peace’. The Magpie falls within the Crowe umbrella of species, figuratively and literally. Magpies can be black and white which represents the light and the dark. I figured all of these things touch on many aspects of my life and this experience.”

The band will be performing songs from The Black Crowes catalogue as well as solo material from Rich and Marc plus “whatever else may materialise,” says Robinson. At the Gramercy shows, the band’s set lists varied from night to night keeping the music fresh for the musicians and the audience. Ford comments “I don’t think I would do very well in a situation where there’s no danger. It has to stay interesting to us. If we weren’t in to it, how could the listener be?”

They also recently revealed a performance of the song ‘Coming Home’, which begins with a tribute to late keyboardist Eddie Harsch (who passed away on Nov. 4), another founding member who was set to perform with the band in New York at the weekend.

WATCH ‘COMING HOME’:
The video was filmed in August last year at Applehead Studios, Woodstock where The Magpie Salute’s seeds were planted, and features Harsch talking, rehearsing, and performing with the band. “This recording came from the last time I got to play with Eddie Harsch,” says Robinson. “He was my friend and musical teacher. His mastery and subtlety will forever be an inspiration.”
The Magpie Salute also marks the reunion of the Rich Robinson and Marc Ford guitar team. Ford left The Black Crowes after their fourth album and 1997 Further Festival tour.

“The Crowes have had their share of guitar players,” says Rich. “Each one has been really cool to play with and each one has brought their own unique playing to the band. That being said, I personally feel that Marc and I have a very deep musical connection. The way he and I played together on those records really showcases that musical bond. As I get older I realise what a gift it is to play with people with whom you share that language of music.”  Reflecting about their deep musical connection,

Marc says: “It’s one of those things that was there before we met. Musically we were already family.” 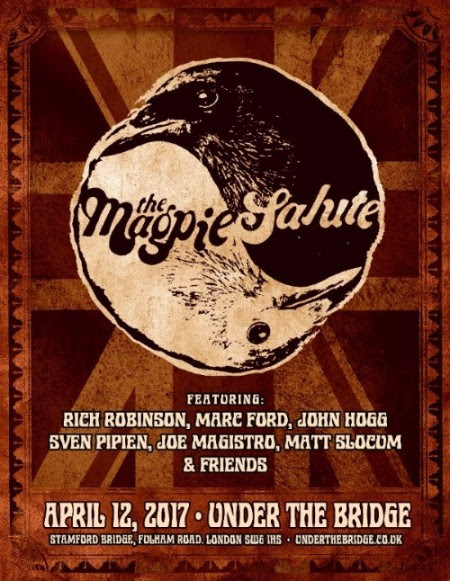