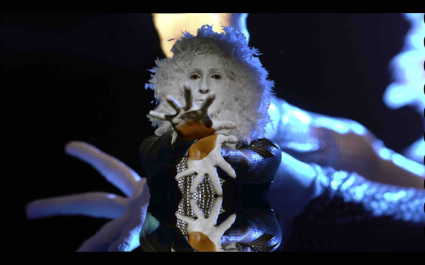 “One of the most creative forces in the world” – Impose Magazine

“Equally indebted to the Who’s Quadrophenia and the Steve Reich opera The Cave, with video and music interacting in fluid, complex ways” – VICE

“Tempting to draw comparisons to both Kate Bush and Paul Giovanni’s earthy soundtrack for The Wicker Man, but this is all Mason, her persona leaving an indelible impression on the listener”  – PopMatters

Renowned performance artist and musician Rachel Mason, freshly signed to Los Angeles-based Cleopatra Records, releases her single ‘Tigers in the Dark’ today.  The previously released video for ‘Tigers in the Dark’ was directed by Matthew Spiegelman and choreographed by Haylee Nichele. This is the first single from the forthcoming album ‘Das Ram’. The single,  will be followed by the ‘Das Ram’ LP, to be released digitally by Cleopatra Records and on limited edition cassette by Practical Records.

Listen To ‘Tigers In The Dark’:
This song is written from the voice of an imaginary animal-human hybrid, who expresses the idea that real life only occurs on the stage, as it represents the creative dimension where everything is possible.

The first screening  for the ‘Tigers in the Dark’ video took place during an immersive theatrical performance at LTD Los Angeles, which involved infamous DJ Rodney Bingenheimer (a.k.a. Rodney on the Roq) and a virtual reincarnation of his legendary English Disco.

‘Das Ram’ is the first complete set of songs written and performed with Mason’s longtime creative partner Jeff Hassay. An artist, writer, and publisher, who also co-runs an art gallery, Hassay recorded, mixed and produced these tracks at his Los Feliz studio.

“Tigers In the Dark is one of those songs that felt like it was already written when I started singing it. Jeff was playing this little guitar riff and I just heard the lyrics and the melody instantly. It felt like it was just handed to me,” explains Rachel Mason. “The voice of the character in the Tigers song feels like it just wanted to exist with or without me. I’m just the vessel that gets to carry it out into the world right now. The video feels like it magically coalesced.”

In scripts, sculpture, rock operas, performances and songs spanning over a decade, Mason has created imagined worlds where animals, objects, mythological creatures and all forms of non-human entities have taken shape through her body and voice. Her shows wrap the audience in fantastical narratives which interweave musical, theatrical and narrative elements into unexpected operatic journeys.

She has recorded 13 full-length albums and three operas, including her most recent unique rock opera feature film The Lives of Hamilton Fish, which toured the world in 2015 and was released this month on VOD. Mason has exhibited her visual art and performance work at museums, film and performance festivals internationally. Her work has garnered press attention from the likes of Vice, Interview Magazine, The New York Times, Artforum, LA Weekly, The New Yorker, The Los Angeles Times, Art in America, and Flash Art.

She is currently co-directing a documentary feature on Circus of Books, the notorious adult bookstores owned by her parents, which played a major role in the Silver Lake and Hollywood music scenes and gay culture.