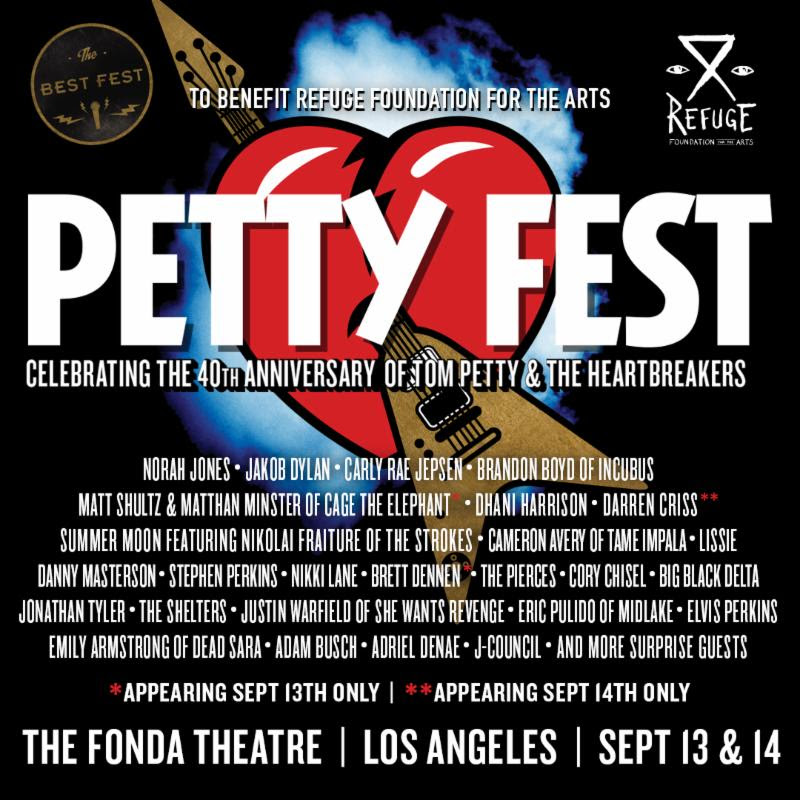 Due to popular demand a second night of Petty Fest has been added at Fonda Theatre for September 14th.  The Best Fest is very proud to announce that Norah Jones, Darren Criss (of Glee fame,) and Matthan Minster of Cage The Elephant have joined the all-star line-up celebrating the music of Tom Petty & The Heartbreakers.
In 1976, Tom Petty & the Heartbreakers released their self-titled debut and embarked on one of the greatest legacies in Rock & Roll. Forty years later, on September 13thand 14th, at the Fonda Theater in Los Angeles, an extraordinary and eclectic array of artists will converge to honor the rock legends at Petty Fest LA: Celebrating the 40th Anniversary of Tom Petty & the Heartbreakers. Ticket sale proceeds will benefit Refuge Foundation for the Arts, a non-profit organization supporting the creation of music and art. Located in Appleton, Wisconsin, the ten-acre sanctuary houses recording and art studios and residences. “Celebrating the living legacy of Tom Petty & the Heartbreakers with an amazing line-up is a lot of fun,” says Best Fest founder Austin Scaggs. “But raising money for Refuge Foundation, and doing our part to help support and nurture a new wave of musicians and artists makes this all worthwhile.”

The Best Fest is proud to begin its partnership with Refuge Foundation for the Arts, which was founded in response to the lack of resources available to artists today, and honored to support their mission: “Helping Artists Create.”

“Refuge Foundation is a way for musicians and artists to take care of our own,” says Grammy-nominated singer and songwriter Cory Chisel, who created the Refuge Foundation with his partner, Adriel Denae. “Our goal is to free the artist’s creative and business process from the strictures of the current model, which can often become an economic stranglehold for artists, especially when it comes to musicians, record labels, and the business of making records.” While Refuge Foundation provides opportunities for so many facets of the arts – photography, sculpture, film, dance, wood and metal working, and more –  the Best Fest will focus its partnership on emerging musicians and The Refuge Artist in Residence Program.  Singer and songwriter J-Council, 35, is the first such musician in residence and will be joining the star-studded Petty Fest cast. “Refuge Foundation offered me the time, money, and the freedom to help me write and create my own message,” says J-Council, who will release his debut album later this year.  “The chance to perform alongside so many incredible artists at Petty Fest is just crazy!”

“Refuge Foundation and The Best Fest are a natural fit,” says Scaggs.  “Music is the thing that keeps our collective of musicians alive, spiritually and economically. By donating the proceeds from Best Fest concerts to Refuge we are waving the flag of togetherness, which is at the core of what we do.”

Once again, The Best Fest is proud to have Jameson Irish Whiskey on board as sponsor.  The Fests started in the same New York community of bartenders, musicians, and craftsmen that adopted Jameson as their drink of choice. The Best Fest and Jameson forged a relationship based on similar values, shared appreciation and interest in spreading the community spirit.
PLEASE NOTE:
* Appearing September 13th ONLY
** Appearing September 14th ONLY

About The Best Fest:

Fifteen years after celebrating Bob Dylan’s 60th birthday by jamming with a few friends in a tiny Lower East Side bar, The Best Fests – including Dylan Fest, Petty Fest, Stones Fest, George Fest, Brian Fest and Neil Fest – are now a rock and roll tradition. The New York Times described The Fests as “one of the most jubilant events of the year” and Rolling Stone touted it as “an experience that is equal parts concert and celebration.” The Best Fest travels the globe producing one of a kind all-star charity concerts. They have raised hundreds of thousands of dollars for charity nationally.  Multiple sold out shows in New York, Los Angeles, San Francisco, Seattle, Austin, Nashville, New Orleans, Chicago, and Dublin have featured guest performances from an incredible and diverse array of celebrities and artists including: Brian Wilson, Norah Jones, Johnny Depp, The Black Keys, Kings of Leon, The Strokes, The Killers, Ryan Adams, The Flaming Lips, Emmylou Harris, Kesha, Perry Farrell, Spoon, Jason Sudeikis, Kristen Wiig, Ben Harper, “Weird Al” Yankovic, Ann Wilson, Jakob Dylan, Trisha Yearwood, and many more. George Fest: A Night To Celebrate The Music of George Harrison is now a beautify captured live album and full length concert film available on Vagrant Records (BMG). For updates and information, please visit http://www.thebestfest.com and follow @thebestfest on Instagram and @The_BestFest on Twitter.
About Refuge Foundation For The Arts
Refuge Foundation for the Arts is a non-profit organization providing sanctuary for the pursuit of creative expression through music and art. Founded in response to the lack of resources available to artists today, it is the mission of Refuge Foundation to offer patronage and opportunity to creators in a supportive and collaborative environment. Bordered by the Fox River in Appleton, WI and built in 1935 by Capuchin-Franciscan monks, our beautiful 33,000 square foot facility houses recording studios, art studios, and artist residences amid ten acres of protected nature, gardens, and orchards.  Refuge Foundation for the Arts: Helping Artists Create  Please visit http://refugefoundationforthearts.com/
About Jameson® Irish Whiskey:
Jameson Irish Whiskey is a smooth and perfectly balanced triple distilled Irish Whiskey rooted in Irish heritage dating back to 1780 when legendary John Jameson released his first cask. The brand’s success comes down to the skilled distillers that ensure Jameson’s unique taste and the communities who have supported its handcrafted quality for hundreds of years. Reliably timeless and simple, Jameson is best enjoyed during great times with great friends.  It has all the quality credentials to allow it be consumed straight, but is versatile and is equally great when mixed. Follow Jameson Irish Whiskey @JamesonWhiskey on Facebook and @Jameson_US on Instagram and Twitter.