BOTH RELEASED ON 2 SEPTEMBER VIA GFM RECORDS

Critically acclaimed singer-songwriter Jinnwoo has released the video for forthcoming new single Woman following its premiere on FAME Magazine, and ahead of its official digital release on the 2 September.

Woman shows a decidedly ‘pop’ turn for Jinnwoo whose singular blend of folk music has been previously described as ‘gothic’ and ‘spooked’. Often an artist preferring a sparse soundscape for his haunting, confessional songs, Woman sees Jinnwoo’s intricate guitar work take on an upbeat, strummed 60’s California-esque sound. Layered with the gentle harmonies of guest vocalist Georgia Ruth, offering something soft to Jinnwoo’s quivering and distinctive vocal, and with a more indie-leaning production courtesy of Weikie (Her Name Is Calla).

Following the tradition of songs such as Prince’s If I Was Your Girlfriend and Beyonce’s If I Were A Boy, Woman’s gender-ambiguous lyrics deal with issues of gender stereotypes in relationships.

Or listen via SoundCloud

“If I could ever be your woman

If you could ever be my man

And a game of house was all we needed

To understand each other better.”

Woman follows the release  this year of singles Wicked Hare (July), a Q ‘Track of the Day’, and Waiting For P To Have A Vision (May) which premiered on Clash and Folk Radio UK. All preceded by  the release in 2014 of Jinnwoo’s debut Your Baby EP and a series of singles: the EP’s title track, Solo Man, You Should Be Feeling This Elliott and I Am, I Am, The World’s Oldest Man,  which collectively garnered coverage across (among others) The Guardian Guide, The Line of Best Fit, Clash, 405, For Folk’s Sake and The Independent, with Jinnwoo being heralded as a “singular talent” (The Independent) and “a true original” (Clash). 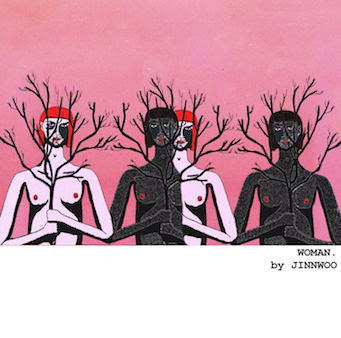 Jinnwoo’s debut album Strangers Bring Me No Light is released 2 September on GFM Records/Cargo Records (CD/Vinyl/Digital). The album can be pre-ordered now via iTunes.

17 September: Songs From the View, Leicester