American Anymen Releases Timely Single ‘Selectively Stupid’
“Cleverly worded, right to the point… sonically like a steamroller clearing the debris before it or a snowball barrelling down a hill, gaining momentum as it ascends… gets under your skin (and circles in your head) in the same way as R.E.M.’s “It’s The End of the World (And We Know it)” – Louder Than War

“American Anymen slams its fist into the corrupt and broken down institutions of the USA… While the music hits the listener head-on, it’s the raging vocal and lyrics vitriol that strikes the target dead-on” –Northern Transmissions

“Bits of hardcore, indie, sludge punk, and avant-garde rock to create a hybrid that is both herky-jerky and catchy. Take a little Guided by Voices and a little Butthole Surfers and you might wind up with a little something like this”  – Punk News
“So just what is American Anymen on about? The American dream gone wrong… with an awesomely jagged sonic formula drawing me back to have another listen” – The Spill Magazine

American Anymen present their first single ‘Selectively Stupid’ from their forthcoming “Start My Center” LP. This is the band’s 11th album, produced by Jen Turner (Natalie Merchant, Here We Go Magic), who was also involved in recording Swans‘ latest album ‘The Glowing Man’ at her studio.

American Anymen is an Antifolk band, created by Brett Sullivan in 1999 in NYC’s Lower East Side. With an unconventional approach to guitar, their sound is an eclectic mix of folk punk with indie rock and old school hip-hop.

Unique to American Anymen is the band’s strong politics and ethical importance placed on the creative process over lavish equipment. “How you create is as important as what you create,” says Brett Sullivan.

Having shared the stage with the likes of Paleface, The Moldy Peaches, and Jeffrey Lewis, some highlights of American Anymen’s shows include (le) Poisson Rouge, Palisades, Hammerstein Ballroom, and Helsinki’s National Theatre.

“American Anymen is trying to destroy the idea that you have to be a professional to make art and give all people access to representing culture through art. Art and culture shape the way we view things and if the ruling class requires you to spend 60 thousand a year on a liberal/art education, and this education is required for you to produce art, then the ruling class have a lock on how we view things though art,” explains Brett Sullivan. With reference to cliché ideas and political misrepresentation of people’s best interests, their lyrics hit the spot as they sing “Your smart, but acting selectively stupid”.

The debut performance in support of the forthcoming album will happen on July 16th at (Le) Poisson Rouge in New York City, alongside performances by former Capital/Universal recording artist The Veldt and A Deer A Horse. You can buy tickets in advance at http://lpr.com/lpr_events/american-anymen-july-16th-2016/ 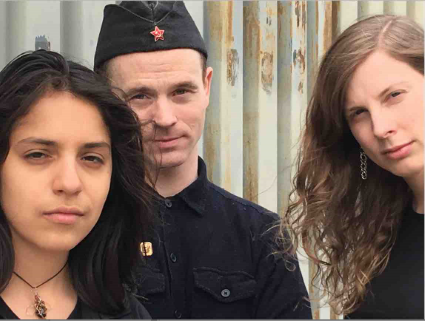