“A perfect fusion of Oasis and The Kinks, as if with slowed-down of Iggy Pop’s Lust for Life. A perfect start to what will likely be a bright music career” – The Record Stache

All photo credits to Jim Jennings

The Swagger, an original London grit-rock band, has announced their forthcoming debut EP, which was produced by Graham Bonnar (Swervedriver / The Brian Jonestown Massacre) and recorded at the renowned Konk Studios (founded by Ray and Dave Davies of The Kinks) in North London.

Slated for release digitally and on CD on July 22, this EP features four tracks from the arsenal of songs they’ve been performing around the UK. They’ve picked these particular tracks from an archive of about 100 they’ve written to date.

With The Beatles, The Kinks, The Who, The Jam, Ocean Colour Scene, and Stereophonics numbering among their influences, their songs are very catchy yet gritty with a melodic punk-rock alternative sound. This EP cumulatively offers a wild hybrid of Brit pop-rock and punk rock with elements of their output reminiscent of the Sex Pistols, Nirvana, Oasis and Neil Young or a fusion thereof.

Hailing from Hornsey, North London, The Swagger originally formed in March 2012. The band is now made up of two brothers – Lee Stevens (lead vocals, rhythm guitar) and Paul Stevens (lead guitar, back vocals), along with mates Will O’Connell (bass guitar) and Roger Malaquias (drums).

The band originally recorded the demos at Tigersonic Studios (Holloway, North London) in late 2015 with co-producer Felix Macintosh, and pretty soon found their way to Konk Studios in Hornsey, North London to record with engineer Josh Green and guitar tech Brendan Quinn. Both The Swagger and The Kinks are local to this area.

The Swagger are among the few bands privileged enough to record at Konk Studios with bands like The Stone Roses, The Kooks, Blur, Franz Ferdinand, Bombay Bicycle Club, Elvis Costello, Steve Winwood, and the Bee Gees having recorded here over the years. The Swagger’s debut EP was mixed and mastered by Pat Collier (Vibrators) at Perry Vale Studios in South London. Neil Barrie designed the EP artwork, website and logo.

Listen To The Swagger EP:

“I saw The Swagger in a local bar near Turnpike Lane. They came on and blew my head off. Live they have the same energy as the early punk bands,” explains Graham Bonnar. “Lee has written over a hundred songs and they all could be singles, so I offered to produce their debut EP. We got Pat Collier from Vibrators fame to mix. Pat did a stellar job. We go way back as he also did Swervedriver’s first single “Son of Mustang Ford. I also brought in Brendan Quinn of Divisionist, who I played some shows with last year in Europe with Rosco and Pete Bassman from Spacemen 3”.

“We met up with Grahamin a bar in Hornsey. We went back to his flat and played him a 2-hour set on acoustic guitar. Graham decided he would help us progress,” says The Swagger’s Lee Stevens.  “This record means so much to us because we have been through so much to get where we are and we finally made a decent record and that is something to proud of”.

The Swagger will be heading back into the studio at the end of 2016 to start work on their debut album, which is planned for release in 2017. In the meantime, they will be playing various gigs, including the Musicians Against Homelessness concert being organized by legendary Creation Records’ boss Alan Mcgee. 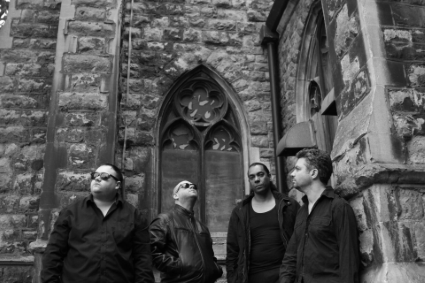