Moon Sounds Records To Re-Release Sounds of Sputnik Debut LP
Plus Smashing New Video 16 May 2016
“For all the things that were concealed behind the iron curtain, one very cool sonic phenomenon has emerged – now called Sounds of Sputnik, the world is a slightly better place thanks to their musings. Very pleased to be involved in this project” – Graham Bonnar (Swervedriver, Brian Jonestown Massacre)

Dariy Karyakin has previously produced for David Lynch pet faveNocturne Blue, has been praised by 6-time Emmy Winner Dutch Rall, and recently joined former Underworld consultant Yannick Joubert as part of the international Krinum Art and Design team. He is devoted to making music videos and short films, for which he has earned various awards and honours.

Rooted in a shared love of melodic dream pop, post-rock and shoegaze, both Sounds of Sputnik and Ummagma bring their own influences from Lush, Curve, Cocteau Twins and My Bloody Valentine, together with Hammock, Jesus & Mary Chain and The Twilight Sad to create briliant “dream noise”.

Listen/Watch ‘Light Scheme’ ft. Ummagma (Fran Ashcroft Remix):
The ‘New Born’ LP also features contributions by several legendary guests: drummer Graham Bonnar (Swervedriver/ Brian Jonestown Massacre) on ‘Overdrive’, and remixes by Malcolm Holmes (Orchestral Manoeuvres in the Dark), psych rock producer Fran Ashcroft (Damon Albarn, Lords of Acid), Russian producers Morozov and Oleg Mezherovsky, and Brazil’s Mind Movies. British producer Marc Joy (Lights That Change, Primal Scream, Oasis, Bernard Butler, Mike Peters, Golden Fable) provided mastering support.
“Working on the SOS remix was a real pleasure, and very straightforward – I just did what the song asked me to, no fixes or additions; everything was there, and in truth was already captured very well. I kind of ran with that and just changed the focus a little,” explains Fran Ashcroft. “When something comes along like this, that’s so well put together, the challenge is not to mess up what’s already right, and keep the integrity of the song intact”

“The lyrics are about the crappy situation we’ve gotten ourselves into as a society – and for us as individuals too, and a hopeful way out of this,” explains Shauna McLarnon of Ummagma. “This song could have remained a YouTube instrumental non-sensation forever if it weren’t for the addition of lyrics and vocals, but I did have in mind that optimism of years past when we really believed we were moving forward. We were clearly on the same wavelength,” says Roman Kalitkin of Sounds of Sputnik.

“A musical masterpiece!… a musical match made in heaven… A must-have album for anyone who adores everything good about the Electronic, Post Rock, Dreampop & Shoegazing genres” – Primal Music Blog

“A lush, dreamy backing of guitars, moody piano, and distant drum work that creates a sense of grandiosity” – Sounds Better With Reverb

“A quite satisfying clash of genres without just sticking to one simple direction. There’s something in there for every fan of shoegaze as well as for those of you who love the enigmatic work of M83” – Nothing But Hope and Passion

“A stunner, it sounds so full, with some incredible vocals from Shauna McLarnon of Ummagma. It’s such a unique sound I’m not sure I can even classify it as shoegaze” – The Revue 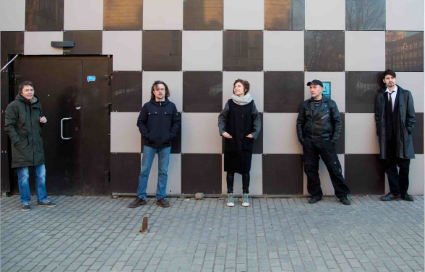 Keep up with Sounds of Sputnik