‘They are a DIY band, but not as you know it. Somewhere between a forceful wave of 90’s pop punk and Britpop, they’re entirely eccentric and entertaining’ – Line Of Best Fit

‘Like being caught between a hammer and an anvil’  – NME 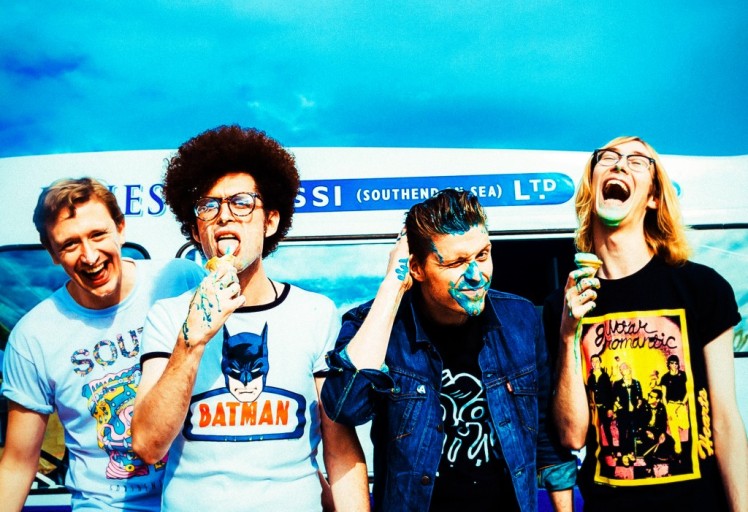 From the very first demo to this very album, the band have done it all on their own fiercely DIY terms. And right now, doing everything their own way has meant that current single ‘Necessary Appliances’ is being championed by BBC Radio 1, 6Music, and Radio X, and a whole bunch of gigs beckons over Summer, including slots at Bestival and other prestigious festivals.

Asylums have created a snapshot of a band and country in a state of change. They may have killer pop hooks, but there’s no bubblegum here – songs about the death of high street retail, austerity, and rampant consumerism, sit cheek by jowl next to tales of sex, outsider culture, and gender equality. With a social media blackout for the first three singles, Killer Brain Waves is the culmination of a two year slow burn – all this in the time that has seen other bands get themselves signed and disappear off the face of the Earth. A new song every three months, each with a new DIY video on a new theme, on their own Cool Thing Records label run out a spare bedroom in Southend-on-Sea. And it’s not just for Asylums – this album has secured Cool Thing a distribution deal with Brighton’s Republic Of Music; meaning that they can now give other bands a platform.

Some of the songs you’ll know. After all, five of the tracks on Killer Brain Waves went straight onto Radio 1, and the band have been playing the length and breadth of Britain supporting the likes of The Vaseline’s, Killing Joke, Ash, and Nothing But Thieves.

The rest of the songs – you may not know them yet, but you will very soon…