THIRD MAN RECORDS TO RELEASE DEATH FROM ABOVE 1979 LIVE LP 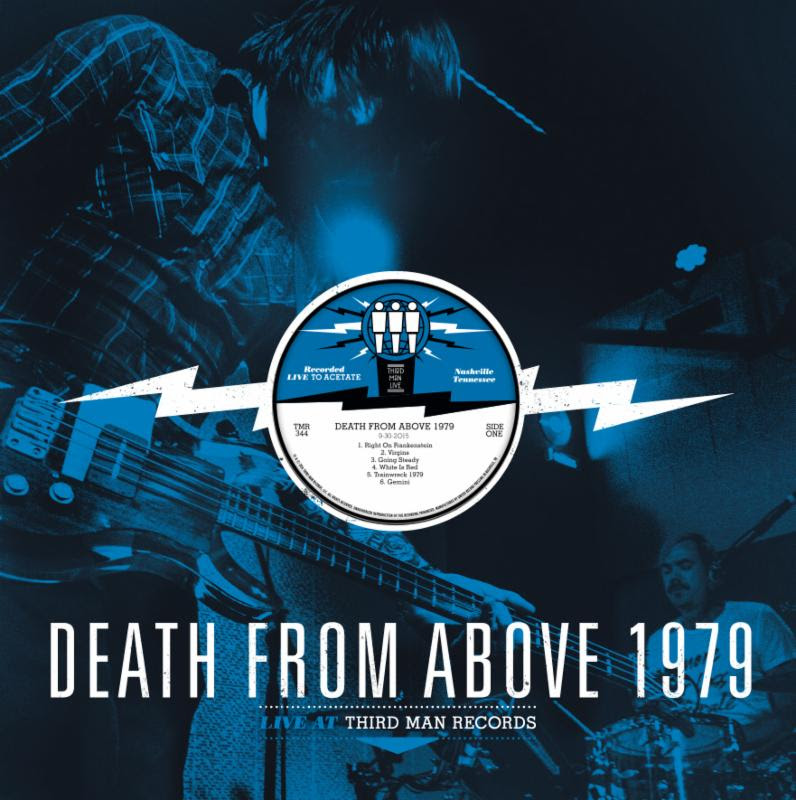 Today, Third Man Records announces the release of Death From Above 1979‘s epic live EP. For over 10 years, these international men of mystery, Jesse Keeler and Sebastien Grainger, have dipped their toes into whatever waters they pleased (MSTRKRFT, Deserts/Bad Tits, Femme Fatale, The Mountains, Black Cat No.13), and created songs that’ll get you off your ass and make you feel things.
A decade after a sudden break up, following the release of their rich and gritty first record You’re A Woman, I’m a Machine, tours with Nine Inch Nails and Queens Of The Stone Age, and one foot in the door of the mainstream, Death From Above 1979 reunited and released their second LP The Physical World last fall. The duo picked right up where they left off and hit the road last summer. Amidst their resurgence, DFA 1979 decided to dip their toes in the water of Third Man Record’s Blue Room. The room which is home to the 1953 Scully Lathe that previously cut James Brown singles at King Records, and where they decided to record the epic live performance to master and be reproduced for generations to enjoy. United Record Pressing has completed the pressing of these records and they are officially ready for release. The Live EP is set for release on April 22.

“We’ve always been wary of live recording experiences because they can end up so sterile and flat sounding and they hardly ever translate the feeling of the actual show. The feeling of the moment,” DFA 1979 said of the experience. “When we were asked to record Live At Third Man Records we agreed without hesitation. If there is one person who knows about feeling the moment, it’s Jack White. He’s the patron saint of vibes. We cut two twenty minute long sets straight to acetate. No second chances. Terrifying but alive. Third Man were such phenomenal hosts and the audience went bananas with us. It was such an honour to be a part of. The whole thing was such a rush, it almost feels like a dream.”

“Oh yeah, Mick Jagger was there. Did we mention that we went out to dinner with Jack and Mick after and then went bowling until 3am? It’s also worth noting that Jack got the highest score followed by Sebastien. Mick and Jesse tied.”

Listen to a track from the live performance below:

Pre-order your copy of DEATH FROM ABOVE 1979 LIVE AT THIRD MAN RECORDS (recorded September 30th, 2015 in Nashville, TN) HERE on vinyl LP. Official release date is April 22. Catch DFA 1979 on tour this summer. Tour dates are below and more information can be found at: http://deathfromabove1979.com/