Vipchoyo Sound Factory out on 1 April 2016

“The spirit of late 80s/early 90s British bands like Catherine Wheel and Ride, but also the dark wave seeds of Joy Division and the stylistic underpinnings of new wave artists like Psychedelic Furs and The Chameleons” – Northern Transmissions

“The most interesting shoegaze phenomenon emerging from Italy. Unique in the world of Italian shoegaze… nothing short of fabulous” – The Record Stache

Stella Diana is back with a new single, called Dedu’n from their forthcoming ‘Nitocris’ LP. The album will be released on April 29 through Italian label Vipchoyo Sound Factory.

In this track, Stella Diana offers a darker sound than usual. Like each song on the new album, it is heavily rhythmic, presents at fusion of shoegaze stylings with 80’s new wave, similar to the sound of Echo and the Bunnymen or The Chameleons, taking the listener to obscure lands full of atmosphere.

In Dedu’n, the voice is drowned in reverb with a low bass and psychedelic guitars… the effect is a long and exciting spatial sound wave

This new single comes on the trail of the first single Sulphur, a dark and sad ballad like a numbing homeopathic remedy, but it is a beautiful slow-burner, beginning quite slowly and then seemingly exploding into infinite space.

Dedu’n (or Dedwen) was a Nubian god worshipped during ancient times, documented as early as 2400 BC. The earliest Egyptian writings about Dedu’n indicates that he was the god of incense, an extremely expensive luxury commodity, largely produced in Nubia.

The album name itself is named for Nitocris, an ancient Egyptian queen and the last Pharaoh of the Sixth Dynasty. According to the chronicles, she was very beautiful but it’s not particularly mentioned. The album artwork defines the album’s title – an abandoned woman, who is beautiful, but sad and suffering. Ethereal and elusive, without a face.

“It’s likely that “she” did not exist in native Egyptian inscriptions,” comments Stella Diana frontman Dario Torre. “This ‘not existing’ thing is very interesting and fascinating. Often you do something, you live, you breathe, you work hardly, you love. Nevertheless, for the people you don’t exist.”

The new single and forthcoming LP follows up the band’s recent Alhena EP, released in 2015 by both British and Italian labels and ranked among the ‘Best of 2015’ on numerous blogger lists.

In comparison to ‘Alhena’ and the band’s previous albums, ‘Nitocris’ is somewhat more introspective. “We now have three members, which has brought about a change in our sound as we’ve become a lot more focused on the atmosphere, as well as changes in intensity within the music,” explains Dario Torre. 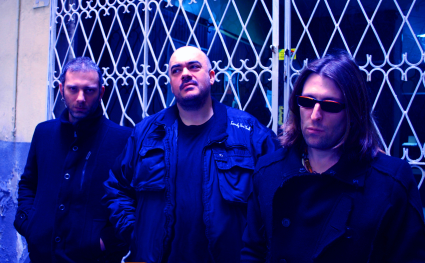