Following last year’s self-titled debut, Italian-Icelandic three piece My Cruel Goro are now back with the release of a brand new EP.

“In our world of 18-minute-atmospheric-noise-remixes-of-Adele and carefully curated cactus-and-carpet Instagram profiles, what we really need right now is unapologetic chaos. Thankfully, Icelandic-Italian trio My Cruel Goro are here. Short and to the point, “Stuff Ep” is a great burst of energy” – Noisey

“The ‘Stuff EP’ is filled with gnarling, impassioned riffs and a thrashing, raucous energy; it’s a collection of raw, infectious offerings that prove that My Cruel Goro are here to stay” – Gigslutz

Hailing from Italy and currently based between there and Reykjavík (Iceland), three-piece My Cruel Goro released their self-titled debut Ep last year (August 24, 2015). The Ep helped the guys get attention from the international press. Now they’ve come back with ‘Stuff EP’, a knock-out record that comes in with genuine punk attitude; bursting with gritty, raucous and filthy numbers.

Here’s how Paul Scott-Bates from Louder Than War, Hiapop Blog and Radio KC describes ‘Stuff EP’: “The record sounds like the bastard son of (early) Arctic Monkeys, Nirvana and Pixies. My Cruel Goro return with another collection of loud and gnarled guitar-noisy pop. Full of power, full of passion, these guys are a breath of fresh air. ‘Stuff EP’ is another collection that you just have to listen to. Infectious tunes that ingrain themselves in your mind, you will want to listen to them again and again”.

*** “Guys do you think Carl was right? What if we’re not real friends? Maybe we are just lonely guys who do… guys’ STUFF!” (Homer Simpson from The Simpsons, “The Saga Of Carl” episode) ***

‘Crapford’: second video off ‘My Cruel Goro EP’. Premiering on The Sound Of Confusion

Praise for ‘My Cruel Goro’:

“Bristling with energy and full of vigour, these short, sharp sonic bursts are the sound of a band with the burning desire to create a frenetic, scuzzy punk riot” – The Sound Of Confusion

“Tight, sophisticated, brutal punk rock. One of the best bands in the world at the genre” – Floorshime Zipper Boots

“Ripping roaring rock at its most raving” – Genius Babble Music 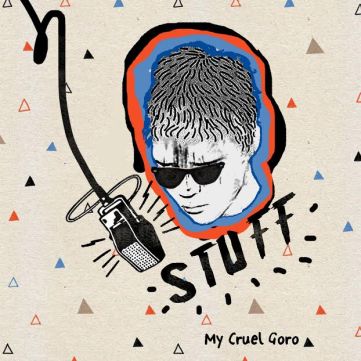 KEEP UP WITH MY CRUEL GORO: