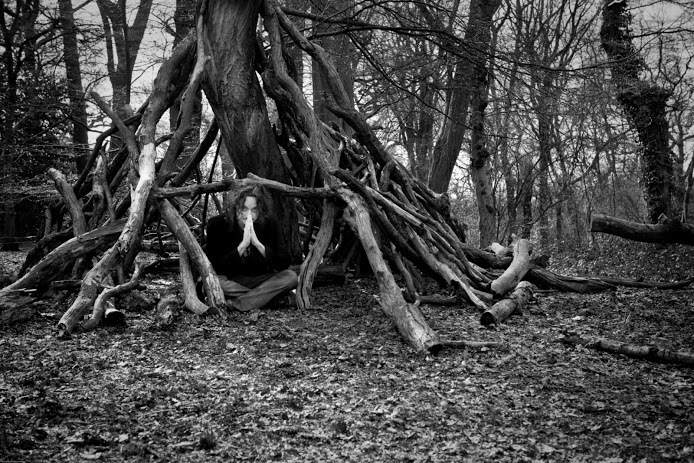 Take a room full of highly skilled but unrehearsed instrumentalists, supply them with enough musical notation to map their way through a song they’ve never heard before, then hit record and listen to the wild nervous energy that this occult ritual will raise. This is the precarious and painful process that birthed ‘On A Red Horse’ – a song which resists all the tepid and cliched formulae of today’s lukewarm folk pop to stand apart from anything else like some twisted aberration of nature.

The word ‘folk’ has become a hub of negative connotations thanks to its adoption by the mainstream, but on this latest track James Edge and the Mindstep wrest it back into serious musical respectability. The accompanying video was the result of a collaboration with animator Ross Butter and is every bit as unshackled as the music. Taking nearly a year to complete and animated by hand at a few frames each day, it’s the painstaking realisation of a stream-of-consciousness concept birthed in the mind of the group’s songwriter James Edge. Like the music it soundtracks, it doesn’t deal in half measures, and together the pieces merge to present the possibility that maybe, just maybe, there’s still some counterculture left in this world.

About James Edge and the Mindstep

“I want to change the way people think about acoustic music and start redefining what it can be. I am pleased to have found, in Folkstock Records, a label brave enough to take on the challenge of releasing something as unusual and abrasive as On A Red Horse”.

James Edge is already a studious musical maestro and a top drawer composer. The Kent-raised musician studied composition to master’s degree level under Joe Duddell – arranger for the likes of Elbow and New Order. After moving to London and starting to gig in 2006, he formed James Edge and the Mindstep to record 2010 debut album ‘In The Hills, The Cities’. The working relationships he built around this time would provide him with some dependable collaborators, including regular engineer and occasional co-producer Tom Aitkenhead, best known for his work with Laura Marling and Bloc Party. A core jazz-folk trio of Edge, double bassist Andy Waterworth and drummer Avvon Chambers materialised. Together the trio started recording second album ‘Machines He Made’ over a five day period tracking everything live and only overdubbing the backing vocals. The songs were largely unrehearsed, with band members and additional session players mostly having not heard the pieces before.

This spontaneous hodgepodge has resulted in some of the most whimsical and deeply experimental music to come out of the capital in a while. The eerie acoustics of Nick Drake inform the atmospherics of much of James’s songwriting, but his sheer compositional nous – which draws on aspects of jazz, modern classical music and punk rock and roll – elevates songs like ‘On A Red Horse’ to a place far above any glib and generic categorisation. He is closer to a modern day Zappa, channelling his eccentric art through folk arrangements to create something deeply surprising, raw, and unnerving.

The On A Red Horse EP is released 15th April 2016 on Folkstock Records. An award winning independent label, they have achieved over 20 plays on BBC Radio 2, 3 and 6 Music over the last year, receiving positive Sunday Times reviews for their compilations and charting albums in The Telegraphs’s Top Folk Albums of the Year for 2014 and 2015.