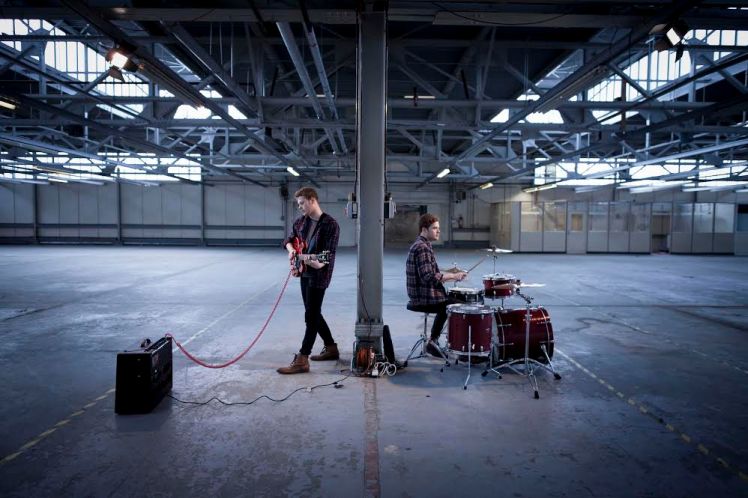 Produced by Dan Austin (Pixies, Doves, Mallory Knox), the record captures the brother’s raw and abrasive energy, showcased during their relentless touring across the UK / Europe. Over the past year the twins have quickly built up a reputation as being one of the UK’s most formidable new live bands and jumped on tours supporting acts such as Hanni El Khatib, King Charles, Little Comets, Kill it Kid and Arcane Roots.

Adapting their name from the infamous ‘Gallery Cabaret’ in Logan Square, Chicago, Gallery Circus began in this open mic party spot after the brothers decided to move to the USA and befriend the DIY punk scene. Here they played shows across makeshift venues in the city including punk gang clubhouses, skate parks and rooftop parties.

Graeme says “Holland On Fire tells the story of a July 4th celebration a couple of years back in Chicago when Dan and I got swept up in an accidental dynamite related incident that ended up shutting down most of the neighbourhood!”

After a year or so of slumming and gigging around America’s west coast, they decided to swim back across the pond to release their debut single Supercell. This song was featured as Radio Ones BBC Introducing track of the week. Dan and Graeme played a great number of key festivals including Glastonbury (where their Sunday performance on the BBC Introducing stage was voted as one of the top 25 performances of the weekend by the BBC), Boardmasters, Kendal Calling and Y-Not. Gallery Circus capture the mood of this generation and put it on stage.

Dan says “We’re a live band at heart and have most fun rocking out on a stage. We get a massive thrill from trying to arrange a song so that it sounds like we’re playing with a full band without hiding behind multiple guitars, samples or backing tracks. I feel our new EP ‘Chi-Town Dogs’ captures our live intensity.”

Listen to ‘Holland On Fire’

‘Holland On Fire’ is out now via Killing Moon Records. For an interactive experience, information on tornado safety and an insight into the brothers’ schemes for next year, check out www.gallerycircus.co.uk.