TEGAN AND SARA RETURN WITH NEW ALBUM;
LOVE YOU TO DEATH TO BE RELEASED JUNE 3, 2016
NEW MUSIC TO COME APRIL 8TH 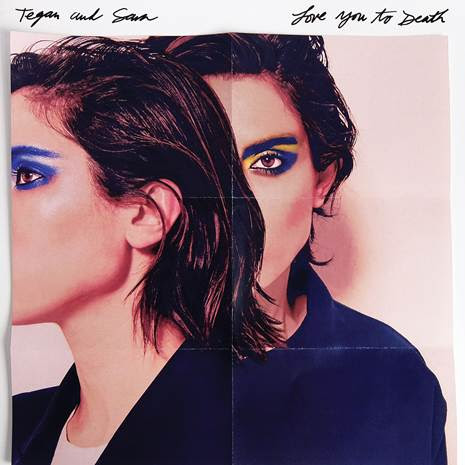 Tegan and Sara have announced their forthcoming album Love You to Death. Recorded in Los Angeles, Love You to Death is the band’s 8th studio album and once again finds the group working with producer Greg Kurstin (Adele, Sia, Beck, Ellie Goulding). It is slated for release on June 3rd while the first taste of music from the album is due April 8th, the same day that pre-orders begin.
Love You to Death is the follow up to Tegan and Sara’s pop breakthrough album Heartthrob featuring the singles “Closer”, which was certified gold in the US, and “I Was a Fool”. In addition to this, the band were featured on the LEGO Movie single “Everything is Awesome” with The Lonely Island, and were invited to perform that song as part of the 2015 Oscar telecast.
Tegan and Sara are playing sold-out intimate shows in Los Angeles and New York in May. Full list below and more info here. More tour dates will be announced soon.
5/2 @ The Roxy Theatre in Los Angeles, CA
5/3 @ Teragram Ballroom in Los Angeles, CA
5/9 @ Le Poisson Rouge in New York, NY
More info:
http://teganandsara.com/
https://www.instagram.com/teganandsara/
https://twitter.com/teganandsara
https://www.facebook.com/TeganandSara