“All My Gods is where ambient, arpeggios, and angelic vocals combine in a stairway of revelry… a wicked remix here like a sweet molasses slow burner, sweeping and trippy” – Overblown Magazine

“Extraordinary output – pads, synths, drums machines and very warm voice that are sure to take you on a special trip” – Zone Nights Magazine

U.S. label Moon Sounds Records (Texas) have just signed Ukrainian artist Omodada feat. Tik Tu for their debut single ‘All My Gods’. This single is released today on February 16 and features the original track, along with an impressive downtempo remix by Canadian-Ukrainian dreampop indietronic duo Ummagma.
Listen To ‘All My Gods’ feat. Tik Tu (Ummagma Remix):

Omodada is the solo project of Lesik Drachuk, a multi-instumental artist and producer, based in Ternopil, western Ukraine. In 2015, he debuted with his neo-psychedelic “Kimnaty” EP, recorded and produced at his own studio Shpytal Records. The EP was met with critical acclaim and featured prominently in many ‘Best of 2015’ lists, including the no. 2 Ukrainian Release according to UK blog The Sound of Confusion and the no. 9 single internationally according to America’s Stereo Embers Magazine, in which Ummagma also featured at no. 5.

All My Gods (feat. Tik Tu) is an epic song about bringing humanity to another planet. “We are big fans of Canadian-American engineer Elon Musk, who is well known by Tesla Motors and SpaceX. His big work now is about colonising Mars,” explains Lesik Drachuk. “Nataly Bagriy (Tik Tu) is on vocals, trumpets and clarinets, making the music sound even more epic. We wanted to create an atmospheric picture with a view on eternal space, envisioning ourselves singing this song in a spaceship leading us to the red planet. We consider ‘All My Gods’ as a perfect soundtrack for the Discovery Science channel.”
TIK TU PERFORMANCE Hi5 STUDIO
Listen/Watch:
MUSIC VIDEO https://www.youtube.com/watch?v=RLtJ5jsPiWc
DOCUMENTARY ON OMODADA https://www.youtube.com/watch?v=1vvdwuWB_Mk
NEWS CLIP ON OMODADA / TIK TU https://www.youtube.com/watch?v=3UuC1yGFSbs
The UmmagmaRemix features as the B-side. Known for their ethereal compositions and for tastefully blending multiple genres, Ummagma are also known for their work with such notable musicians as Robin Guthrie (Cocteau Twins), Malcolm Holmes (OMD), Graham Bonnar (Swervedriver, Brian Jonestown Massacre), and Fran Ashcroft (Damon Albarn, Lords of Acid), among others. In 2014, their collaborative LP ‘New Born’ with Moscow’s Sounds of Sputnik held in America’s CMJ college radio charts for 7 weeks – longer than any other release from the former Soviet Union. It also earned Sounds of Sputnik a Jagermeister Indie Award. In 2015, Ummagma released their ‘Frequency’ EP, which was included in over 30 blog ‘Best of 2015’ lists. 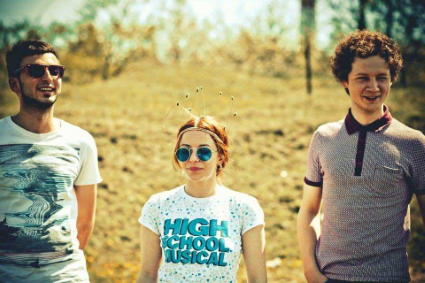