As Well As UK Live Dates

“They might be only just eighteen, but The Orielles demonstrated technical skill and an ability to write catchy garage rock tracks that put many older artists to shame. ” The Independent

“An immediately infectious slice of indie surf pop that has you yearning for summer already.” A Music Blog Yeah 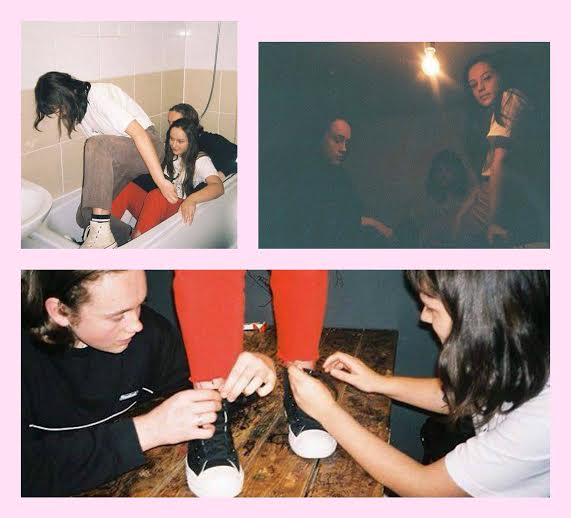 Once considered Yorkshire’s best kept secret, a hugely successful 2015 well and truly placed Halifax-born trio The Orielles on the map of guitar-wielding stars. Now the troupe are back with anthemic new work, alongside UK dates between January and April.

Garnering major interest thanks to their lilting harmonies, glistening guitars and punchy basslines, and spending last summer blowing people away with their electrifying sets at festivals including Dot To Dot, Live At Leeds and Liverpool Sound City, the surf-pop trio are ready to hit the road again, bringing their first EP of the year, Jobin, along for the ride.

The band – sisters Esme and Sid Hand-Halford and friend Henry Wade – formed after meeting at a house party, with the sisters only learning how to play their instruments after getting the band together. Keen advocates of DIY methods and following riot grrrl bands and California groups, The Orielles put their own stamp on that lo-fi sound. Receiving strong praise from NME, Steve Lamacq and Amazing Radio’s Shell Zenner, a strong following in Leeds, Manchester and their hometown of Halifax has grown into country-wide interest.

Again references can be made to the likes of The Raveonettes, The Breeders, Pixies and Beach Boys, with this latest release comprising soaring vocals, beautiful, distorted melodies and jangling six strings. Immediately hooking the listener in thanks to the unarguably infectious qualities, it’s the sound of summer arriving a few months early, and all the better for it. It’s also the sound that will be heading out to some of the finest small venues in England, from Birmingham to Sheffield, London to Nottingham, finishing up with a very special trip to Toronto for Canadian Music Week. Definitely one for the diary then.