Meter Bridge It Was Nothing + Rodney Cromwell Remix Out Today

“Evocative of Man Machine period Kraftwerk, had the German four-piece chosen to invent glitchcore on their way to perfecting technopop” – The Record Stache

““Refreshing addition to today’s synthpop scene, bringing in post-punk and new wave influences in ways unlike others” – Stereo Embers Magazine

Canadian synthwave duo Meter Bridge are releasing their latest single ‘It Was Nothing’ through WEATNU Records. Comprised of two tracks, this is being offered as a free download via Bandcamp. In this thoughtfully arranged and sparkly composition, moogs whistle and rhythms click into the night, as these two voices blend into a sound that is part Human League, part Blade Runner, and 100% Meter Bridge.

Listen To ‘It Was Nothing’:

“It Was Nothing is about a public figure spreading lies that play on peoples’ heartstrings… for the purpose of getting millions of people supporting a false agenda,” explained frontwoman Jill Beaulieu. “This kind of hypocrisy is very difficult to expose… because ignorance is bliss.”

This B-side for this single features a remix by Rodney Cromwell, whose debut ‘Age of Anxiety’ LP (2015, Happy Robots Records) introduced electronic pop lovers to some epic retro future synth music.  Influenced by the electronic sounds of the pre-digital age, his music has crossover appeal equally embracing synthpop and indiepop. This has gained Cromwell solid support from the likes of Malcolm Holmes (OMD) andRusty Egan (Visage, Rich Kids). 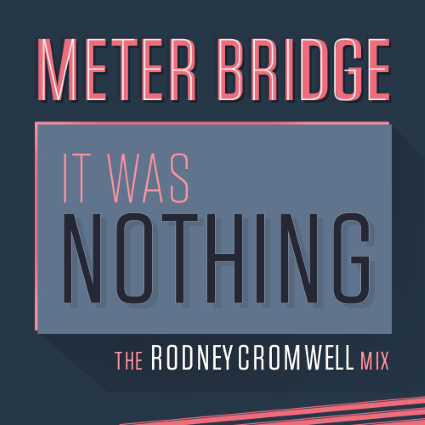