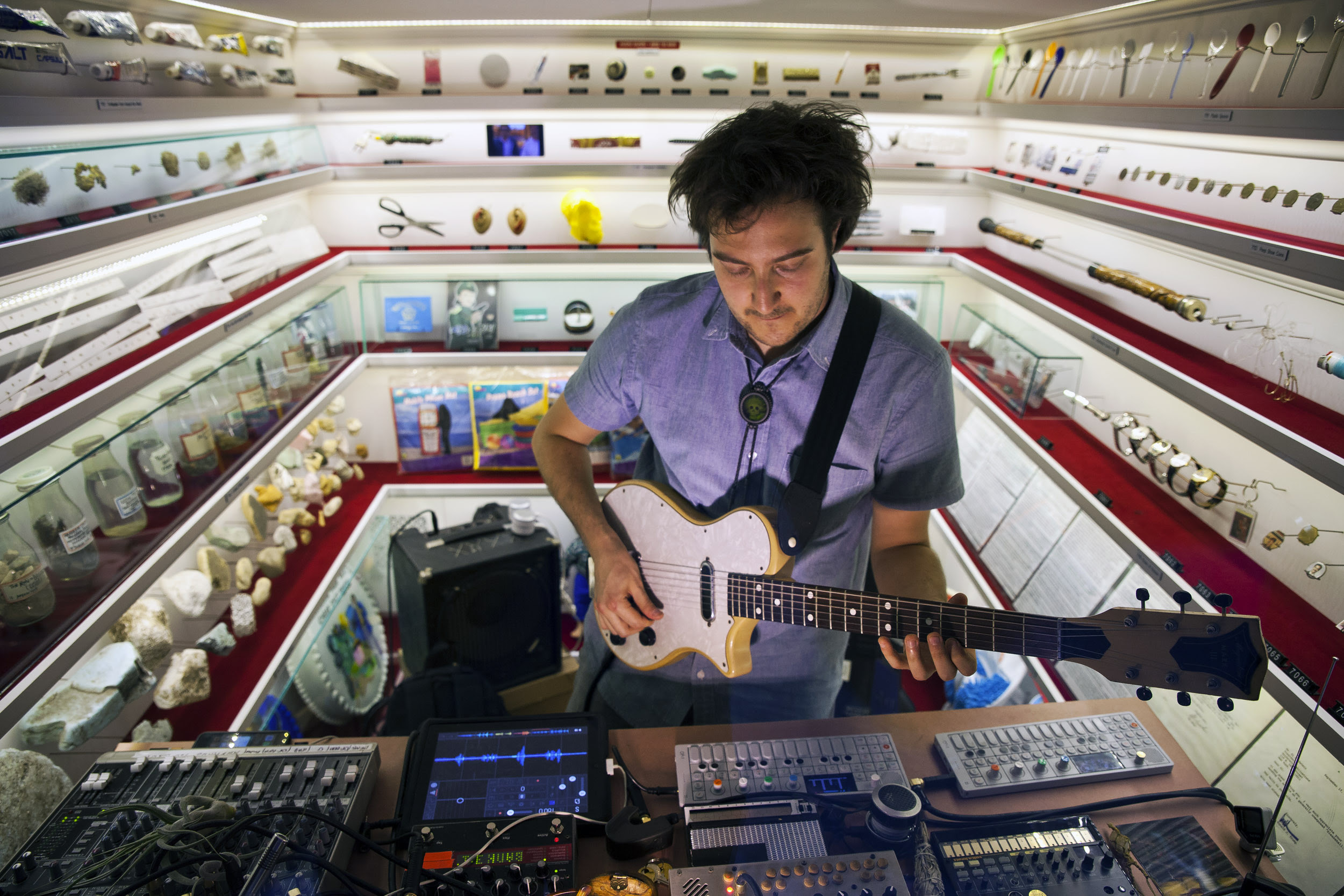 In June 2014 artist-musician Grey Gersten (a.k.a. Eternal Lips) exhibited Custom Melodies — an interactive music exhibition in which participants collaborated with the artist to create custom songs at Mmuseumm in New York City. During the 12 night exhibition, Gersten wrote, performed and recorded over 110 biographical songscreating roughly 7 hours of new music. Participants filled out a “Custom Song Application” which featured questions about lifestyle habits, reoccurring dreams, childhood memories and included designated areas for a band name, song title, cover art and self-portraits. Once their application was completed, participants were taken inside the Custom Melodies song factory for a private 20 minute appointment during which Gersten —surrounded by myriad instruments — spontaneously wrote, performed, and recorded their custom song live in one unedited take onto a lo-fi handheld recording device.

Both the exhibition and its companion piece (Eternal Lips self titled debut EP with guest vocals from Sharon Van Etten and TV on the Radio’s Kyp Malone) were featured in the New York Times, Wall Street Journal, Rolling Stone, Interview Magazine, Vice’s NOISEY, SPIN, Gizmodo and other publications. Time Out NY ranked Custom Melodies #1 on its Things To Do list declaring “It’s safe to say that there hasn’t been anything like this event in…well…ever.” Mmuseumm Co-Founder Alex Kalman was the Creative Director of Custom Melodies and co-produced the exhibition with Grey Gersten. “I’m interested in creating unique experiences that inspire people to get inside of music and encounter its true power and beauty,” says Gersten. “Custom Melodies explores new ideas about what a song can be, how it’s made and how it’s shared with the public.”

This week, Gersten launched http://www.custommelodies.com, an interactive multi-media web art piece that allows users to experience the music, art, and writings created at the Custom Melodies exhibition. “You’re not just exploring music, you’re exploring people,” says Gersten. “Each song is a musical portrait of an individual. It’s their actual voice – singing about their life. The lyrics are drawn verbatim from their stories and dreams. It’s like autobiographical karaoke.”  Each of the 110 songs has its own interactive multi-media webpage with excerpts from the “Custom Melody Application” that provide a deeper understanding of each person and their song.

“I designed the Custom Melodies website to feel like its own universe. It doesn’t resemble an ordinary music streaming site because Custom Melodies is not ordinary music,” says Gersten. “Hopefully the website’s playful and other worldly interface inspires users to connect with the work in a personal way and intuit their own meaning from the experience.” The website’s unique user interface was conceived by Grey Gersten who worked with designer Matt Goodrich and programmer Julia Wallin to construct the site. Graphic Artist Nicole Ginelli’s ambient backdrops give the website a mesmerizing depth. Users interested in an “audio only” experience can turn on the website’s radio station — a live audio broadcast that shuffles the entire 110 song music library and features hourly weather reports and advertisements.

Gersten’s lo-fi unedited handheld recordings give listeners an intimate fly on the wall perspective of each song’s creation. The songs are enveloped by traffic sirens, car alarms, motorcycle roars, and conversation fragments of tourists and drifters passing by Mmuseumm’s unenclosed location in Cortlandt Alley, New York City. “I love these field recordings because they capture a moment. Listening to a person sing in their actual environment deepens your understanding of their reality; it adds an immediacy to the story or feeling being shared. Recording New Yorkers singing about their lives in a noise proof recording studio would have felt contrived,” says Gersten. “One night I was creating a song with an older woman. There was a very private and emotional feeling to the moment and then suddenly a garbage truck roared into Cortlandt Alley, parked in front of Mmuseumm and just blasted us with noise and stink. Custom Melodies was about committing to The Present and exploring what’s revealed by the absence of control.”

Gersten plans to curate other artists and musicians involvement in the project and exhibit Custom Melodies internationally and at prisons in the United States. “Custom Melodies is an open platform, hopefully it inspires us to speak and listen to each other in new ways. The more voices we involve, the broader our consciousness will become,” says Gersten. “Each of these songs is a snapshot of a human moment. There are funny songs, boring songs, optimistic songs, existential songs, love songs, food songs, nostalgic songs, preachy songs…these songs are like pieces of a mosaic, if we look at all of the them together as a whole maybe they illuminate something about the human condition.”