FURTHER SEEMS FOREVER
ANNOUNCES ‘HOW TO START A FIRE’ 2016 TOUR
WITH SELECT DATES ACROSS THE U.S. 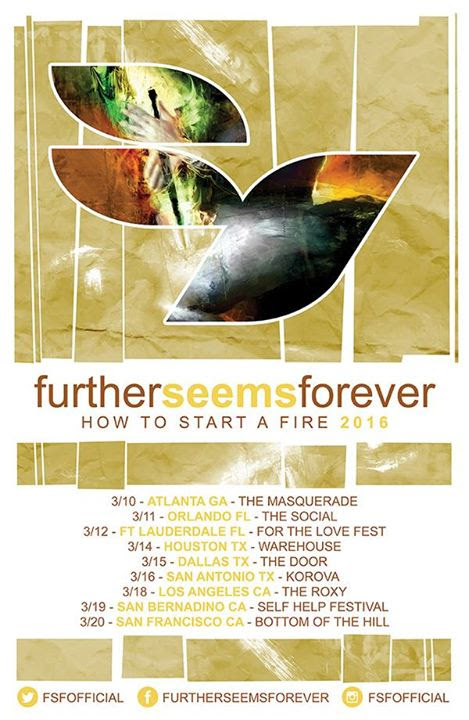 VIP TICKET BUNDLES ON SALE NOW:
http://bit.ly/1JNmy0N
Further Seems Forever has announced they will stop in 9 cities to perform the band’s sophomore album How To Start A Fire in its entirety. The first time the band has hit the stage together in almost ten years, this tour kicks off on March 10th in Atlanta, GA and wraps up on March 20th in San Francisco, CA. Additionally, VIP ticket bundles are available and include one general admission ticket, a souvenir laminate, meet & greet access as well as a screen printed poster to be signed at the meet & greet. Fans can purchase the VIP bundle exclusively, here: http://bit.ly/1JNmy0N. For more information on Further Seems Forever, please visit: http://furtherseemsforever.com.
When asked about the tour, bassist Chad Neptune said: “Further Seems Forever was a lot of things… and for a lot of people ‘How To Start A Fire’ is what it was. Jason, Steve, Derick & I toured the world in this incarnation more than any other. We met a lot of people and slept on a lot of their floors. Things ended very abrupt with Jason to say the least. I think we realized that there was a contingent of our fans that wanted to see Jason again. This is also therapeutic for us.”
Upcoming Tour Dates:
March 10th – The Masquerade – Atlanta, GA
March 11th – The Social – Orlando, FL
March12th – For The Love Fest – Ft. Lauderdale, FL
March 13th – Warehouse – Houston, TX
March 15th – The Door – Dallas, TX
March 16th – Korova – San Antonio, TX
March 18th – The Roxy, Los Angeles, CA
March 19th – Self Help Festival – San Bernardino, CA
March 20th – Bottom Of The Hill – San Francisco, CA
Further Seems Forever have shared the stage with Poison The Well, New Found Glory, The Early November, Thursday, Coheed & Cambria, etc.
and have previously featured on MTV, NY Times, SPIN, Alternative Press, Diffuser, Substream Magazine, and many more
Facebook: https://www.facebook.com/furtherseemsforever
Twitter: https://twitter.com/fsfofficial
Instagram: https://www.instagram.com/fsfofficial