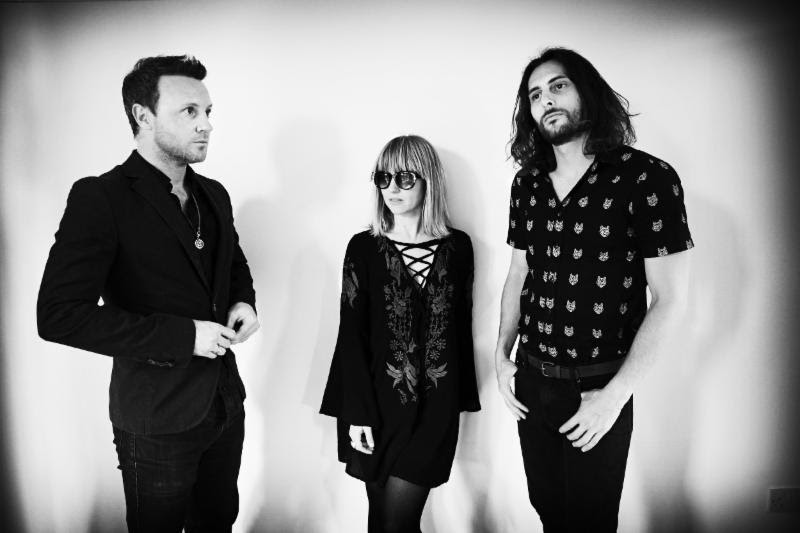 THE JOY FORMIDABLE ANNOUNCE FORTHCOMING ALBUM DETAILS, US TOUR, SHARE NSFW MUSIC VIDEO FOR LATEST RELEASE ‘THE LAST THING ON MY MIND’
Welsh trio The Joy Formidable are happy to announce that they’ll be releasing their highly anticipated forthcoming album Hitch on Friday, March 25th via their own record label C’Mon Lets Drift in partnership with Caroline (US), Orchard/ Membran (Europe) and MapleMusic (Canada.)  Once described by Rolling Stone as “wickedly bracing and Himalaya-huge,” the fantastic live band went to work on their third studio album with one mission: to make sure their unique live performance and energy was captured on record.  “We realized we needed to build a space and do it ourselves, go back to being three people in a room again” said Ritzy Bryan regarding the band’s decision to self-produce the new album.
Following suit with their decision to take the reigns on this album, The Joy Formidable chose to “work with people who feel as strong as we do about the music, who listen to albums, love the art and let that take control.”  One such early supporter was the legendary Alan Moulder (The Killers, Nine Inch Nails, The Smashing Pumpkins, etc;) who mixed the album. The band states “on this album, we’ve been lucky enough to feel that same enthusiasm from everyone involved.”
Recording in their studio The Red Brick in the Welsh hills where they grew up boded well for the band, and Hitch is a huge leap forward from its predecessors The Big Roar (2011) and Wolf’s Law (2013.)  More minimal in style, with earthy tones of the Blues and Folk, it swaggers and haunts in equal measure. “It’s one of the most driving records we’ve made but it’s also the saddest’ says Ritzy “This album takes you to places that we might not have taken you before”
No stranger to boundary pushing topics, The Joy Formidable are also excited to present their entirely NSFW music video  for their first single ‘The Last Thing On My Mind.’  Ritzy explains “It’s a song about freedom, about feeling alive & a part of that is about sexual liberation too, which is why we wanted to make a music video from the perspective of a heterosexual female gaze. It shows men in many forms, being free, being sexy, being watched, it’s beautiful and provocative and is some small attempt to re address the existing imbalance of perspective and nudity in music videos”
Hitch is available for pre order now, it features exclusive artwork by Ralph Steadman and anyone who orders the album from the band’s web store will receive bonus track “Passerby” (not available on the album) as well as access to tickets before the US tour general on-sale on Friday January 29th.
Track Listing:
1.     A Second In White
2.     Radio Of Lips
3.     The Last Thing On My Mind
4.     Liana
5.     The Brook
6.     It’s Started
7.     The Gift
8.     Running Hands With The Night
9.     Fog (Black Windows)
10.  Underneath The Petal
11.  Blowing Fire
12.  Don’t Let Me Know
Live Dates:
Monday, March 28th 2016 Los Angeles, CA @ The Roxy
Tuesday, March 29th 2016 Los Angeles, CA @ The Roxy
Wednesday, March 30th 2016 San Francisco, CA @ Great American Music Hall
Friday, April 1st 2016 Portland, OR @ Wonder Ballroom
Saturday, April 2nd 2016 Seattle, WA @ Neumo’s
Tuesday, April 5th 2016 Minneapolis, MN @ First Avenue
Wednesday, April 6th 2016 Chicago, IL @ Double Door
Thursday, April 7th 2016 Iowa City, IA @ Mission Creek Festival
Friday, April 8th 2016 Nashville, TN @ Mercy Lounge
Sunday, April 10th 2016  PIttsburgh, PA @ Mr Small’s Theater
Tuesday, April 12th 2016 Boston, MA @ Paradise Rock Club
Wednesday, April 13th 2016 Washington, DC @ 9:30 Club
Thursday, April 14th 2016 New York, NY @ Irving Plaza
Friday, April 15th 2016 Philadelphia, PA @ Underground Arts
Pre-Order Hitch At The Following Links:
iTunes
Amazon MP3
Google
Check Out The Last Thing On My Mind:
Google
Spotify