ANNOUNCE HEADLINING US TOUR IN JUNE

Thrice is pleased to announce that they will be touring the US with La Dispute and Gates this June. The band’s first headlining tour in four years begins at The Shrine in Los Angeles on June 3rd, and wraps up at Summit Music Hall in Denver, CO on June 25th. A full list of dates can be found below. Fans can purchase pre-sale tickets here: ThriceTour.

After a three-year break from writing and touring, the Orange County quartet are back in the studio recording their next full-length which is expected to be released in 2016.

“It’s been four years since we’ve toured the US, and I can’t imagine a much better way to break that drought than to hit the road with a brand new record, and share the stage with our friends in La Dispute. We had a blast playing a bunch of outdoor festivals last year but nothing really beats the feeling of playing in a packed out club,” says drummer Riley Breckenridge. 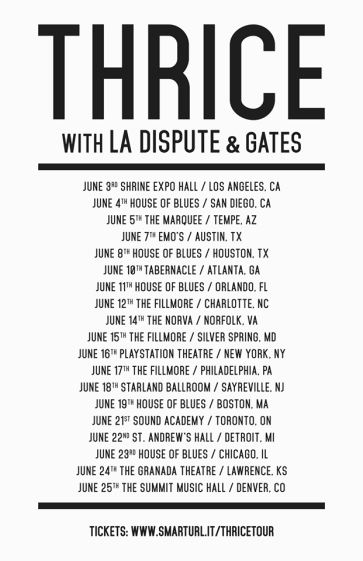