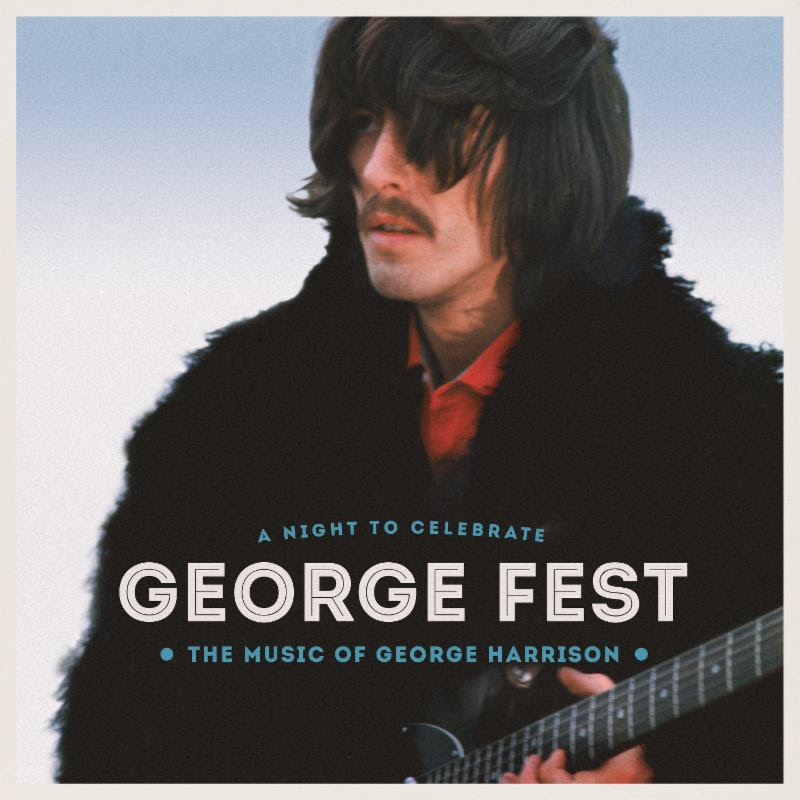 George Fest: A Night To Celebrate The Music Of George Harrison Concert Film And Album To Be Released On February 26
2014 Concert Featured Some of The Biggest Names In Music Including Brian Wilson, Brandon Flowers, Norah Jones, The Flaming Lips, Ben Harper, Dhani Harrison and Many Others
The day after what would have been George Harrison’s 73rd birthday, February 26, 2016, Hot Records Ltd. and Vagrant Records are proud to present George Fest: A Night To Celebrate The Music Of George Harrison. Recorded and filmed on September 28th, 2014 at the The Fonda Theater in Los Angeles. This wonderful live tribute will be available in 4 configurations including 2xCD/DVD, 2xCD/Blu-Ray, 3xLP (180 gram) and digital download.
Produced by Dhani Harrison and David Zonshine, Harrison stated, “I’ve always imagined a small club show where my generation of musicians could cut loose on some of the deeper tracks from his career… So, in a totally new and vibrant way, I once again found myself taking the stage with some of my most treasured musical heroes to the sound of the most familiar music in my life… I hope you enjoy listening to these as much as I do. They are some of the best interpretations of my father’s songs I could have ever thought possible.”
To see a trailer of the film go here and watch below:
The line up includes Brian Wilson, Nora Jones, The Killers’ Brandon Flowers, Conan O’Brien, The Flaming Lips, Ben Harper, Britt Daniel from Spoon, Heart’s Ann Wilson, Dhani Harrison, “Weird Al” Yankovic, The Strokes’ Nick Valensi, Perry Farrell and many others.
On top of the concert footage the DVD has interviews with the musicians backstage and at rehearsals talking about George Harrison’s influence on their art.
You can hear the Traveling Wilbury’s “Handle With Care” performed by the all-star cast here and watch below:
Below is the song list:
DISC 1
1. Introduction
2. Old Brown Shoe Conan O’Brien
3. I Me Mine Britt Daniel from Spoon
4. Ballad of Sir Frankie Crisp (Let It Roll) Jonathan Bates with Dhani Harrison
5. Something Norah Jones
6. Got My Mind Set On You Brandon Flowers from The Killers
7. If Not For You Heartless Bastards
8. Be Here Now Ian Astbury from The Cult
9. Wah-Wah   Nick Valensi from The Strokes
10. If I Needed Someone Jamestown Revival
11. Art of Dying Black Rebel Motorcycle Club
12. Savoy Truffle Dhani Harrison
13. For You Blue Chase Cohl with Weezer’s Brian Bell on guitar
14. Beware Of Darkness Ann Wilson from Heart
DISC 2
1. Let It Down Dhani Harrison
2. Give Me Love (Give Me Peace On Earth) Ben Harper
3. Here Comes The Sun Perry Farrell from Jane’s Addiction
4. What Is Life  “Weird Al” Yankovic
5. Behind That Locked Door Norah Jones
6. My Sweet Lord Brian Wilson with Al Jardine
7. Isn’t It A Pity The Black Ryder
8. Any Road Butch Walker
9. I’d Have You Anytime Karen Elson
10. Taxman Cold War Kids
11. It’s All Too Much TheFlaming Lips
12. Handle With Care Brandon Flowers, Dhani Harrison,Jonathan Bates”Weird Al” Yankovic, Britt DanielandWayne Coyne
13. All Things Must Pass Ann Wilson,Dhani Harrison, Karen Elson and Norah Jones
Pre-Order Now:
Amazon DVD: http://smarturl.it/GeorgeFestDVD
Amazon Blu-Ray: http://smarturl.it/GeorgeFestBlu
Amazon Vinyl LP: http://smarturl.it/GeorgeFestLP
George Harrison Store: http://smarturl.it/GHStore
iTunes Audio: http://smarturl.it/GeorgeFestIT
http://www.georgeharrison.com/