The Hour of Bewilderbeast

To celebrate the 15th anniversary of his seminal, magical, Mercury-prize winning debut, Badly Drawn Boy (aka Damon Gough) is re-releasing a new deluxe version of the album, including bonus unheard tracks and new artwork. A film about the making of the album will be released in the spring.

The re-release follows this summer’s UK tour, where Gough played the classic album in its entirety for the first time ever, to standing ovations from sell-out crowds including The Barbican and Manchester’s Bridgewater Hall.

“It’s an album that I’m extremely proud of,” says Damon, “and it’s the album that people will mention if they stop me in the street, or come up to me in a bar. It’s an album that struck a chord with a lot of people, and still means a lot to them… which is what you’re aiming to do with music.”

Released in May 2000 to widespread acclaim, The Hour of Bewilderbeast beat other shortlisted nominees including Coldplay, Doves, Leftfield and Richard Ashcroft to that year’s Mercury Music Prize. Like all great debuts, it captured the zeitgeist of the moment, managing that rare feat of sounding both completely of its time, and utterly timeless. Bewilderbeast went platinum and Damon was then asked to write the soundtrack the film of Nick Hornby’s book About A Boy, which became a huge hit. He went on to release eight studio albums over 12 years, before taking a break over the last couple of years, and now he’s back with a fresh focus.

It’s an album that shouldn’t really work on paper, a bewildering assortment of leftfield folk ditties, poetic shanties, experimental passages and nocturnal piano ballads, some recorded in bedrooms, some in studios, with a myriad of different oddball production techniques, and numerous personnel playing most instruments known to man, and several not. But, underpinned by the genius songwriting of Damon Gough and his intuitive ear for melody, it worked beautifully, and charmed a generation of music critics and music lovers. Damon arrived fully formed yet badly drawn, an overnight success which had taken years, simultaneously a little shambolic and in possession of grand vision, somehow both cocksure and yet self-doubting, all of which only endured him to a public growing tired of the over-polished sheen of late 90s.

Andy Votel has updated his classic Bewilderbeast artwork, loosely based on Leonardo da Vinci’s Vitruvian Man, for the rerelease. “I’m very fond of the cover,” says Damon. “It sums up the time as much as the music does. The gatefold vinyl will have the original artwork and when you open it up there’s a new version which reflects everything that’s happened in the last 15 years.”

The full tracklisting is as follows; 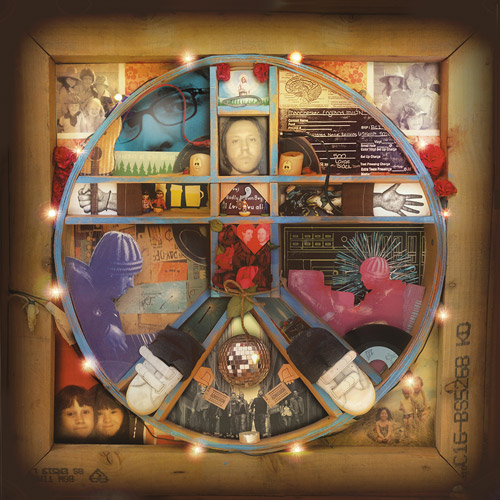 The Hour of the Bewilderbeast deluxe version is released on January 22nd 2016.