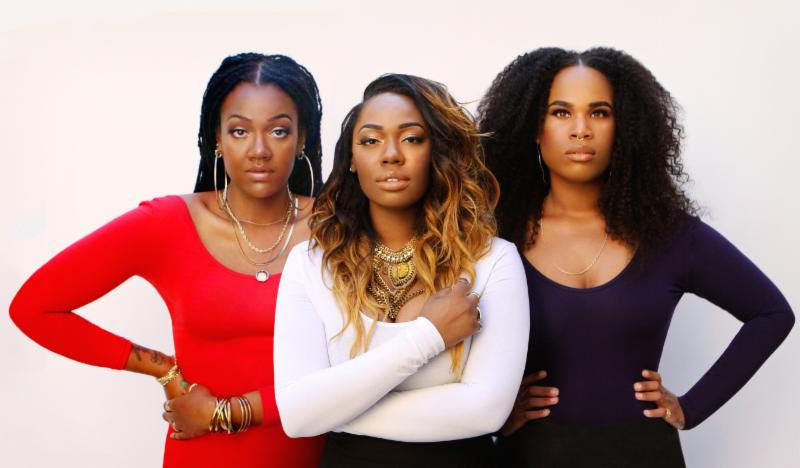 Announces The Release Of Much Anticipated Debut Album We Are KING On February 5, 2016
Pre-sale commences today
LA Trio To Play Hometown Show At Lyric Theater
KING is proud to announce their long awaited debut full length album We Are KING will be released on February 5 through the band’s independent label KING Creative.  The first sampling from the album is “Hey (Extended Mix)”.  In a review on Pitchfork naming the song ‘Best New Track’ writer Marcus Moore wrote, “‘Hey’ is perhaps the best song in KING’s discography so far. It’s remarkably blissful, recalling tender milestones no matter how modest or grand.”
Check out the song:
KING is an innovative LA trio made up of twins Paris and Amber Strother and musical sister Anita Bias. Their sound blends an array of genres and eras, and heard throughout each track is the common thread of soulful authenticity.
Through their debut EP they garnered critical acclaim with NPR stating, “Not only does KING establish itself squarely amongst 21st – Century soul electronica with stargazing synth chords; the LA based group also stands out from many other female combos by writing, producing, singing and handling nearly all of its songs’ instrumentation.”  They received raves in Billboard, Village Voice, Glamour, The London Sunday Times and Guardian to name just a few.  Listen to their NPR All Things Considered interview here.
Along with critics the band’s peers took notice as well, with artists Erykah Badu, Questlove, Nile Rogers, Prince, and many others singing their praises.
The 12-song album was produced by Paris, and all songs were written and performed by she, Amber and Anita.
A force to be reckoned with live, KING is playing a show on December 15th at the Lyric Theater in Los Angeles. Of their live show, Billboard raved that “the ladies left the audience in love.”
Pre-Order today and download “The Greatest” here!
Below are the songs for We Are KING
The Right One
The Greatest
Red Eye
Supernatural (Extended Mix)
Love Song
In The Meantime
Carry On
Mister Chameleon
Hey (Extended Mix)
Oh, Please!
The Story (Extended Mix)
Native Land
Find KING Online:
weareking.com
facebook.com/weareking
twitter.com/weareking