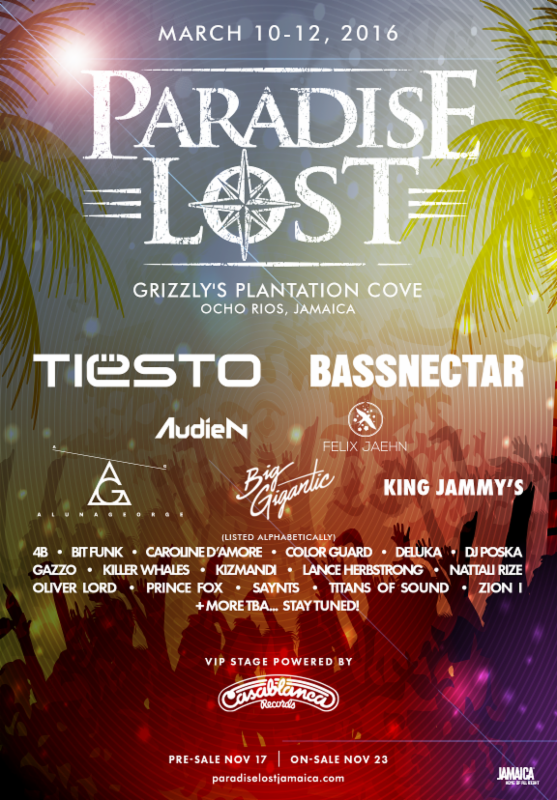 EDM FESTIVAL TO BE HELD IN BEAUTIFUL OCHO RIOS, JAMAICA
Electric Dance Music (EDM) will revisit its Jamaican roots with Paradise Lost (http://www.paradiselostjamaica.com), Jamaica’s first EDM festival. Paradise Lost will take place at Grizzly’s Plantation Cove in Ocho Rios, Jamaica from March 10-12, 2016.
“Early Bird” ticket sales begin November 17th at 10am EST for registered users of http://www.paradiselostjamaica.com and tickets will go on-sale to the public November 23rd at 10am EST.
All tickets must be purchased through http://www.paradiselostjamaica.com or at select retail outlets as listed on http://www.paradiselostjamaica.com.
Main Stage headliners will include Bassnectar (March 11) and Tiësto (March 12) with additional performances by; AlunaGeorge, Audien, Big Gigantic, Felix Jaehn, King Jammy, Lance Herbstrong, Natalli Rize, Zion I, with others to be announced. Casablanca Records will curate a luxurious Beachfront stage which will feature;Caroline D’Amore, Gazzo and Prince Fox amongst other Casablanca recording artists.
Jamaican and legendary Dub producer, King Jammy commented, “I feel great about EDM coming to Jamaica because most people don‘t know it originated here. I am not just an innovator I am a fan and for my performance I’m going to perform never before heard tracks with a back-to-the future effect while mixing live on stage. I listen to artists like Bassnectar and it makes me feel good that the dream is still alive and being built upon by today’s talented artists.”
The pristine 135 acre at Grizzly’s Plantation Cove in St Ann, will form the backdrop of Paradise Lost whileoffering camping and glamping in Tent City (which will be opened March 5th through the 15th).    The location was chosen because of the natural beauty of the land, but more significantly its rich cultural history. St Ann is the birthplace of Bob Marley, Marcus Garvey, Burning Spear, and Shabba Ranks. It was there that Lee Scratch Perry discovered the Wailers (giving prominence to Marley and Peter Tosh). St Ann is also the burial place of Marley – who was laid to rest there in his family’s mausoleum.
Dub-Music will mark its 50th anniversary in 2016. The music form which was started in Waterhouse, Kingston, eventually led to a new form of music called “Electric Dance Music” – a phrase coined by Lee Scratch Perry, in June 2015. In speaking about the connection between EDM and Jamaica, Billboard wrote, “EDM DJ‘s that dissect and otherwise manipulate their tracks while playing live are following an innovation established by the brilliant Jamaican engineer, sound system owner/selector, the late King Tubby. While working as a disc cutter for Duke Reid and using a two-track recording console, Tubby eliminated vocal and instrumental segments, sometimes stripping a song down to a single, thunderous bass line, which he embellished with echo and reverb effects, in a process called dub.”
“Jamaica is the entertainment mecca of the Caribbean,” said Jason Hall, Deputy Director of Tourism, Cruise, Attractions and Events. “The island offers diverse festive options to both locals and visitors alike.  Jamaicans the world over, are proud of our musical heritage. Our music producers and artists are inventors and trendsetters, with one such innovation being Dub Music (Dub-Step), the precursor to Electric Dance Music.  The Jamaica Tourist Board is pleased that Caribbean Trans Media has seen it fit to bring the music back to its birthplace, Jamaica. “
Paradise Lost also offers exciting and fun-filled Spring Break activities including: beachfront camping and bonfires, boat rides, fireworks display, Parasailing, Banana Boat Rides and other activities. In addition, over 50 local and international vendors will create “Paradise Village”, a culinary hub. Paradise Lost is also proud to offer its attendees excursions to local attractions such as the world-famous Dunn‘s River Falls, as well as a tour of St. Ann to include a visit to Nine Mile, Bob Marley‘s birthplace and resting-place.
Event partner and Paradise Lost spokesperson Jason Newman said at a recent press conference, “Paradise Lost will host 75,000 visitors ages 18-49 over the three day period, and as for the economic impact the event will bring to Jamaica, an estimated 2300 jobs will accompany the festival with millions of dollars in revenues being generated. We are thrilled to bring tourists to the island and bring Jamaican culture and hospitality to the festival community.”
Paradise Lost will be the ultimate EDM festival in Jamaica – the unforgettable destination, featuring electrifying music, enriching Jamaican experiences hosted in a highly secured and friendly environment