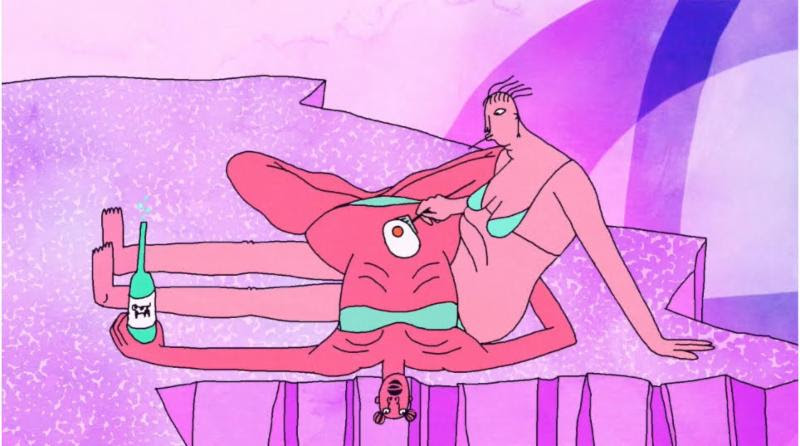 JAMES SUPERCAVE DEBUT ANIMATED VIDEO MASHUP WITH SINGLE ‘BETTER STRANGE’ AND ACCLAIMED UK ANIMATOR SOPHIE KOKO GATE’S AWARD WINNING SHORT ‘HALF WET’
BAND TO HEADLINE THE ECHO ON NOVEMBER 11TH
“An excellent album on the way with Better Strange.”
-Derrick Rossignol, NERDIST
James Supercave is proud to present their newest project combining recently released single, “Better Strange” and acclaimed UK-animator Sophie Koko Gate’s short ‘Half Wet’ premiering yesterday via Nerdist!  The video, edited by Moxie Bellucci, is as innovative in ideas as James Supercave’s music. Of the track’s central meaning, Supercave confesses, “It’s about a girl who floored me. I caught her in that moment of wild where she was completely uninhibited and real.
The song is a plea to stay in that moment – you’re better when you’re yourself. Your weird, broken, beautiful self.”  Gate shares an intense love for all things strange, evident in her award-winning short ‘Half Wet.’  Of her animation, the band states it was “Love at first sight. It’s like 90s cartoons did the same drugs that our music is hooked on. Beautiful, bizarre, hilarious.”  A perfect mashup of equal parts peculiarity and odd symbiosis- the music backing obscure ideas and the animation falling seamlessly into place with all things strange.
The single serves as the title track off James Supercave’s much anticipated debut album to be released early next year via Fairfax Recordings. KCRW’s Jason Bentley named James Supercave, “One of 5 LA musicians to watch.”
If singles are first impressions, “Better Strange” is a sweat-drenched handshake on a warehouse dance floor. The track cuts the familiar slam and glam of psych-pop with the odd details that continually throw James Supercave into the uncanny valley of the pop genre: the lurching groove of the bass, the relentless loop of the synth, the shape-shifting timbre of the vocal.
“You’re so much better strange. You’re so much better when you make mistakes with me,” urges Supercave in a fit against normalcy. “Better Strange” dare the listener to commit to the mistakes they’ve always wanted to make.

Check out the video here!