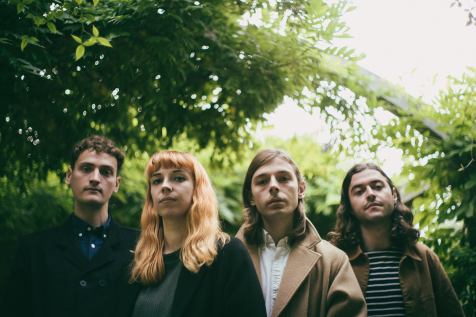 Husband Material started life as many bands seem to these days. Boy/Girl in bedroom starts making music on a laptop, music gets too big for bedroom and too big for laptop. Real life humans join to perform bedroom songs and that’s usually where it ends. In the case of this band their songs kept growing sonically while the rooms they played started to get bigger and the bedroom became a distant memory.

Self -described as “Anorak Pop for the masses” Husband Material’s songs are instantly accessible, danceable and thought provoking in equal measures. Made up of friends and lovers, frontman Richard Board recruited fellow band members, Charlotte Desborough, Zac Harris and George Rothman to start playing his synth heavy songs he’d recorded during the Winter of 2013. Testing the water in spring this year the band posted a first track and calling card which soon clocked up thousands of hits and the attention of the blog masses.

Later a debut single arrived via acclaimed Bristol indie ‘Art is Hard’ and soon sold out. Talk Too Much goes one step beyond previously heard tracks with their boldest production and biggest chorus yet. If you like your indie-pop with a futurist 80s sheen then Husband Material ARE your new favorite band. Talk Too Much is backed with What Did I Do Wrong and arrives on hyper limited square picture disc via Super Fan 99 this November.

‘TALK TOO MUCH’ VIDEO:

STREAM ‘TALK TOO MUCH’ HERE