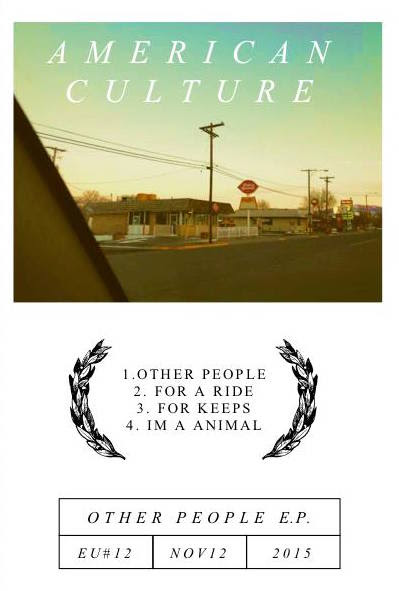 LISTEN ‘To ‘For Keeps’
“A democracy of pop is here, something with experience, looking down on hipster scrutiny and the mythos of pop culture to get at what makes this honest sort of music so great to begin with… the fact that it can, and should be, honest music” – Tiny Mix Tapes

2015 has already been busy year for the prolific American Culture. Earlier this summer, the band released a collection of recordings called The Olympia Sessions made with Calvin Johnson at his Dub Narcotic Studios back in 2013 which features J. Mascis (Dinosaur Jr.) providing guitar for the album cut “Princess Music.”

In March, the band released their debut LP Pure American Gum to critical acclaim with the Big Take Over exclaiming, “Pure American Gum explodes with pop hooks, reverbed vocals and feedback-laden guitars. Each song is a snapshot in time, a pure celebration of that naïve innocence we had in our youth that youngsters still hold today.”

Now, American Culture are excited to announce the release of the Other People EP, out November 12 via Unsatisfied Records.


“Well, when I was growing up, driving around with friends or with a friend was such a huge part of coming of age. The freedom. The first time you were out on your own. We wouldn’t even need a destination. Just driving around together. Being free. That’s the feel I wanted to make with this song. It’s a driving song.” Says songwriter / guitarist Chris Dracala of the first single “For Keeps,” a dreamy slice of AM gold.

American Culture create music that they like to call, “Music For Introverts” an anthemic, noisy, pop racket inspired by growing up in small town America. To put it in the band’s own words, “American Culture is the music that we all grew up with as American wasteland kids. Music that got into our blood during those fragile and formative years. The soundtracks to when we first tried drugs, cut class, had sex, became who we are. When ever that may have been.”
The band has also announced a west coast tour kicking off in Boise, ID on November 14th at The Olympic and concluding in Flagstaff, AZ at Creekside.
Listen To ‘For Keeps’:
American Culture Tour Dates:
Nov. 14th– The Olympic- Boise, ID
Nov. 15th– Lucky Liquor- Seattle, WA
Nov. 16th– The Know- Portland, OR
Nov. 17th– The Knockout- San Francisco, CA
Nov. 19th– Non Plus Ultra- Los Angeles, CA
Nov. 20th– Gnar Tapes- Los Angeles, CA
Nov. 21st– 4th Street Vine- Long Beach, CA

Other People EP tracklisting:
1. Other People
2. For A Ride
3. For Keeps
4. Im A Animal
Links:
http://american-culture.tumblr.com/
https://twitter.com/amculture