Meet Rodney Cromwell… In The Mind of a Retro Synth Master 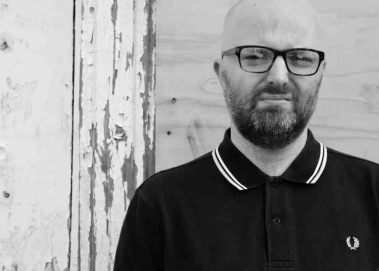 There is one name that has been popping up more and more, whose music emits the energy and feel of quite an awesome triangle, comprised of legendary bands Kraftwerk, New Order and OMD – this is the territory of Rodney Cromwell (a.k.a. Adam Cresswell, previously of indie-folktronica band Saloon and later the duo Arthur & Martha with Alice Hubley). Of course, to achieve that sound, he has got to actually get in their same soundspace and that means using mainly retro analogue synths and gear.

His musical craftings, unique songwriting style and extremely witting texts have won him praise in dozens of country and landed him a full page feature in Electronic Sound Magazine, not to mention NME, Northern Transmissions and a spot at Indietracks, to name but a few of his recent happenings. I caught up to Rodney after returning from his gig with Death & Vanilla and bombarded him with questions. Read on and get to know Rodney Cromwell

When did Rodney Cromwell surface?

The name Rodney Cromwell goes way back to 2002 when I was in a band called Saloon from Reading UK. We played indie music with moogs; what these days is called folktronica. During our time together we released a couple of albums, loads of singles and gigged constantly, and one of the things we were offered was to submit a track to a ‘Lord of the Rings’ tribute album. The rest of the band (who weren’t quite as nerdy as me) declined, but I being massive Tolkien geek couldn’t turn it down. (As an example of my geekyness, I read Tolkien’s impossibly dense Middle Earth Bible ‘The Silmarillion’ on my honeymoon.) So one afternoon in a couple of hours I knocked up a track on my Korg MS-10 and Casiotone called  ‘Radagast the Brown’ which was released on the compilation under the pseudonym Rodney Cromwell – the joke being that Rodney Cromwell sounded like someone getting my real name wrong.

Can you tell us a bit more about the project’s history?

Skip forward more than 10 years and two bands later, I’m now a married father of one, I have large mortgage, a garden full of weeds and an unhealthy addiction to buying vintage Star Wars figures on eBay. I started tinkering around and writing a few songs, not for any specific band or project or desire, just because it made me feel better about myself. It became my way of exorcising a few personal demons and, as a result, making music became fun again.

We understand you have a new maxi-single coming out for ‘Black Dog’ in connection with that?

Yes indeed, it has taken us forever to put together the single. When I made ‘Age of Anxiety’ I was under no illusion that anyone would listen to it, let alone enjoy it. Now I know that there are a few people interested in what I am doing, it has made the process of finishing anything new so much more difficult. I can’t get away with my lo-fi ‘just knock it out’ approach anymore. I think we mastered the single about 4 times, even changing mixes at the mastering stage, which I’d never done before in my musical ‘career.’

The single itself is four tracks from the album all remixed and reworked with my long time collaborator Dom Cresswell, who happens to be my brother. He has a music technology degree and studied under John Foxx so he knows what he is doing far more than I do.

It was really hard choosing the lead single but I went for ‘Black Dog’ which is the closing track of the album, simply because a lot of people liked it.  I’ve called it ‘Black Dog (Version)’ which follows a pattern in my career of releasing ‘versions’ like I’m in a dub band or something. We released from the first Saloon album ‘Girls are the new boys (version)’ and from the Arthur and Martha’s album ‘Autovia (version)’. Both tracks were pretty popular, so I’m hoping to repeat the trick a third time. It’s my ‘Return of the Jedi.’

The whole EP is very full-on and danceable, in fact it borders on hi-NRG at times, perhaps because I have been listening to a lot of ‘The Best of Divine’ lately.

Who are some of your main musical influences?

With the songs on the album I very much wanted to it be a nod to the sounds that I grew up with, so the music would be a ‘safe-space’ to counterbalance the lyrical themes of panic, depression and general mental unease. So I drew on the music I loved as a kid and you can hear quite openly the influence of Kraftwerk, New Order, Section 25, OMD, Pet Shop Boys, Vince Clarke and so on. I don’t think of myself as a synthpop artist though; I see myself as much more as part of an indie and lo-fi tradition; it was really 90’s indie bands like Flying Saucer Attack, Quickspace, Stereolab, Broadcast that really influenced me to make music in the first place.

Wow – five only? This is probably the hardest question you’ve asked.  How about…

How would you describe your sound?

How about “Optimistic music for troubled people in distressing times.”

Or maybe “the sound of a (near) middle age neurotic who spends far too much time in the company of old synthesizers”.  Or the more succinct: “Poundshop New Order”.

Tell us about the process of recording your songs?

I would call it an ‘organic’ recording process. Which means I mostly work on my songs in the spare room when my wife is out with the kids. Which is the main reason it takes so long for me to finish anything. I just get out some old synths and muck about. There is no magic recipe I’m afraid.

Are there any new artists you can recommend?

Well who counts as a new artist these day? Most of the new music I listen to made by people in their thirties and forties. I was listening to Brutalist Architecture in the Sun a minute ago. Their track ‘A13 Dual CarriageWAVE’ is one of my favourites of the year. I’ve been listening to the Priest album all summer; that record gets better with each play. Yesterday I was listening loads to a guy called Gabe Knox who I found on Bandcamp, he has an EP on there of long synthy krautrock jams, proper lovely stuff. And I love the U.S. Girls album that came out recently on 4AD. It is sort of electro indie dub with operatic banshee-like vocals. Who wouldn’t like that?

Which band/song would you love to make a cover version of?

To be honest there aren’t any songs I want to cover; I don’t see any reason in covering anything you can’t improve and 99% of the music I listen to I always think is better than my own. And of course, if I was capable of doing good covers then I’d be in a covers band and probably be making more than my last 49p Spotify paycheck.

Haha. I think I’ve said enough. Thanks for the interview, and thanks to anyone who got to the end of it. Rod be with you.

Thanks a lot Rodney. We really appreciate you taking the time for the interview.

Keep up with Rodney Cromwell