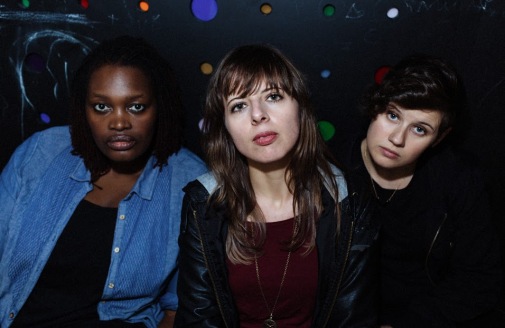 An exhilarating portrait of Cat Bear Tree’s melodic alt-pop meets angular indie oeuvre, ‘Settled In Our Hearts’ is out on iTunes on Friday 23 October. The EP opens with ‘Adult’, the group’s most danceable tune to date, displaying faint traces of Bloc Party and Warpaint on a song about the complexities of love and maturity. ‘In Actual Fact’ takes a more global view as the band confront the issue of human beings displaced by war and undergoing a loss of home, family and identity. “I Don’t Have A Country I Just Live Here/My Identity Is Not To Be Enforced/My Identity Is Me” sings Zoe Konez as the rhythm section of Claudia and Sarah forge a catchy rush of propellant indie-rock.

‘Arms Length’ balances wonderfully interwoven harmonic vocal rounds atop a crunching rhythm guitar and tumbling beat, before the chorus floods the track with uplifting melody, while EP closer, ‘Relationship’, which was premiered by Q Magazine as its Track of the Day, showcases the three-part harmonies and instrumental interplay of Cat Bear Tree at their most intense, underpinning a brutally raw lyrical document of a fading relationship. “I’m ready to say I’m single”, asserts Zoe as the song builds towards its epic choral coda.

‘Settled In Our Hearts’ was mixed by Howard Redekopp (The New Pornographers, Tegan and Sara) and produced by celebrated singer-songwriter Rhiannon Mair.

Enthused by the trail-blazing women forming brilliant bands such as The Donnas, L7 and Elastica, the three members of Cat Bear Tree spent their teenage years sneaking into London gigs and sourcing inspiration from the capital’s more independently inclined music scenes. It was this punk-rock spirit that first bonded Zoe Konez (guitar and vocals), Claudia Mansaray (bass and vocals) and Sarah Smith (drums and vocals), three fearless players who’d been cutting their teeth on the DIY circuit. Having joined forces it was clear that Cat Bear Tree were a forceful prospect, their infectious indie hooks and open-book lyrics soon earning plaudits on both the blogosphere and stage, where key shows included supports to Mike Skinner and The Tuts. Debut EP ‘Let’s Share Hearts’ was an early statement of intent, earning the group comparisons to the likes of Electrelane and Sleater-Kinney, but it is new release ‘Settled In Our Hearts’ that captures the true qualities of Cat Bear Tree and will stand as their launchpad to broad acclaim, for, as the band admit: “We’ve pushed ourselves further out. This EP sounds like us, now, and we can’t wait for people to connect with it.”

Listen To ‘Adult’ via Soundcloud HERE

Listen To: ‘Relationship’ via Soundcloud HERE

“Track of the Day” Q Magazine