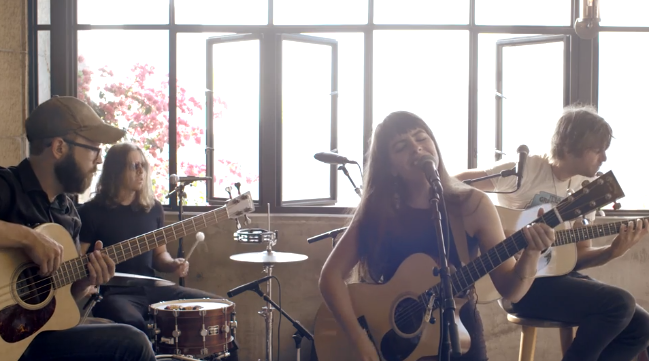 Philadelphia’s Hop Along reveal their exclusive Ace Hotel ‘5 at 5’ performance with A.V. Club today.  Featuring a spellbinding and strikingly raw version of “I Saw My Twin”from the band’s critically praised Painted Shut, the video was filmed in Downtown Los Angeles just days before they hit the stage at FYF Fest.  Hop Along is set to kick off a national fall tour with Modest Mouse this week that will be followed by a series of UK/EU dates in November!

Painted Shut released May 5th via Saddle Creek and saw the band featured as a staple on the mid-year “Best of 2015” lists, including Pitchfork, Rolling Stone, SPIN, NPR, Alternative Press, Stereogum, Paste, and VICE’s Noisey. The record is available at the Saddle Creek Online Store, iTunes, Amazon and independent record stores across the globe.

Revered for their electrifying live energy, be sure to catch Hop Along on tour with Modest Mouse in a city near you!