Turing Test is a magnetically danceable concept record about the technological singularity and human consciousness.

Written, recorded, produced and largely performed by Brent Puls at his home studio in Mt. Washington, Turing Test features a wide array veteran Los Angeles musicians. Puls reflects on the experience: “Being relatively new in town, I felt like a kid in a candy store. I’d go to a show and see a band with a killer bassist and I’d think- that’s exactly the feel that I need on the song I’m tracking. So after the show I’d just find them and ask them to come over and play. Los Angeles is a gold mine.”

Listen to ‘To Be Alive’:

Thanks to ‘Cataline for answering the Planet Of Sound some interview questions, which you can read below:

When did Cataline start?, Can you tell us a bit more about the history?
I started CATALINE in July of 2014- It started as a passion project for myself. I was producing and working with other bands for years, then one day I was nearly fatally stabbed in a mugging gone awry (not kidding). After this near death experience I decided I had to stop my brooding singer / songwriter work and focus on something that was about the wonder and fascination and curiosity I was feeling about life, so I started CATALINE. The name comes from a 1st century BC Roman senator, falsely accused of trying to overthrow the republic because of his populism. I always thought he got a bad rap, so I named the band after him.

Who are your influences?

Tom Waits and De La Soul for lyrical content. Early Funkadelic (America Eats its Young especially) and ELO for feel. Goran Bregovich for horn arrangements. Fela or Femi kuti for percussion. Raffi for melodies (not kidding). David Bowie for, well, everything. My favorite album of all time is Jeff Wayne’s War of the Worlds (those tones!), but these days most of my inspiration comes from Radiolab and Neal Stephenson books.

Although close contenders are De La Soul / De La Soul is Dead, Michael Jackson / Off the Wall, Public Enemy / Fear of a Black Planet, and maybe Revolver. Or maybe those should be in the top 5. Christ I dunno.

How do you feel about playing live?

I love playing live almost as much as I love being in the studio. It feels like someone lit a fire inside me and I have to sing my ass off to put it out.
How would you describe Cataline’s sound?
A decadent soaring cacophony of harmonies and synths in the service of wonder and epiphany.
Tell us about the process of recording the songs?
Most of these songs originated fully formed in my head, so I usually laid down whatever was clearest first: the guitar the drums the bass etc, then build the track around that, often ditching the original track that started the process. If we want to get technical- for drums I mostly use Battery with a lot of samples from libraries I’ve saved up over the years- either that or Maschine. Then I’ll mess with synth bass in Massive or maybe one of my analogue synths. After I have that foundation I’ll lay down lead vocals, then harmonies, then all of the backing vocals, so that anything else I add doesn’t get in the way of the vocals. After that it’s playtime and I just start grabbing instruments and throwing them at the track to see what I like.

What new artists would you recommend to our readers?

Although not exactly new I’d highly recommend everything Sylvan Esso is doing- as well as Garrett Borns. His stuff is great. This isn’t new at all but if you’re looking for something awesome that a lot of people slept on, check out Lhasa De Sela. She was a fantastic artist. Also check out Jeff Wayne’s musical War of the Worlds- the synth work is amazing. OH- and Komeda, Swiss pop from the early 2000s. Amazing stuff.
What song would you absolutely love to cover?
Anything by Bowie- especially Rock n’ Roll suicide. That’s the one song more than any other I wish I’d written. It’s so epic! I’ve also been working on a cover of Negra Murguera, a song by an Argentine band called Bersuit Vergerabat.

What does the future hold for Cataline?

The next album is another concept record, this time written from the perspective of the planets in our solar system. I’ve written them all, I just need to start laying them down. In the interim we’ll be touring the midwest and east coast soon and playing a ton here in SoCal.

People say to follow your passion so often I think it’s a given- what’s more important is that we follow our curiosity. CATALINE will always be about discovery and fascination, about that moment when you step off the spaceship onto the new alien landscape.

Cataline is excited to announce the single release party for single ‘To Be Alive’ at The Satellite in LA today: 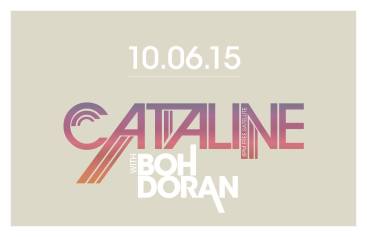