UK shoegazer The Virgance released “Paradigm 3”, his third LP in a little over 18 months today, on the El Vals del Conejo label.  The Virgance is Nathan Smith, formerly guitarist with nineties UK indie band Ripley, which saw BBC Radio 1 and MTV Europe airplay, and co-producer of noughties electronica outfit Loveless. Smith’s first solo LP as The Virgance was ‘Lost Continent’, which was released in February 2014, followed by the ‘Hiko Shrine’ LP in January 2015. Both received critical acclaim in the shoegaze community and blogosphere.
As with his two previous albums, Smith’s distinctive, swirling guitar sound is at the forefront, in harmony, on all but one of these eight tracks, with synthesized, ethereal female vocal sounds and some of his most advanced drum work to date. Shauna McLarnon of celebrated dreampop duo Ummagma contributes some of these vocals, which meld into the texture of the first single ‘Down The River’. There are radio edits for three of these tracks, two of which were created by Ummagma. 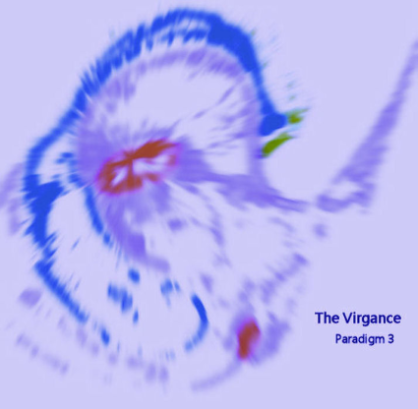