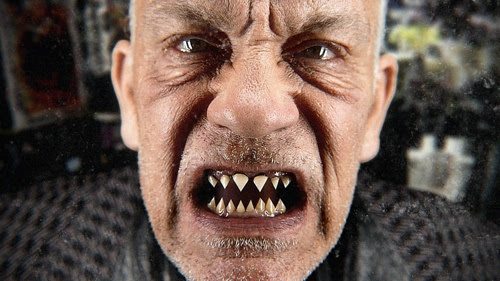 Sometimes the creative stars align in the most peculiar of ways.  In these situations the elements come together at exactly the right moment with such speed and ease, one would assume that it was the work of some sort of higher power.

Such is the case when it comes to Like A Puppet Show, a vinyl-only release slated for fall’s Record Store Day on November 27, Black Friday. Like a Puppet Show marks the first of a series of collaborations between actor/director John Malkovich, top commercial director/photographer Sandro, and producer/composer Eric Alexandrakis.

For this project, John Malkovich recited Eric Alexandrakis’ version of Plato’s Allegory of the Cave over an original piece of music, while being paired with exclusive photos of Malkovich taken by Sandro. Once Malkovich’s part was completed the group began reaching out to a variety of artists to lend their creative flair to the release.

The results were instant and diverse: from the Electro-Kraftwerkian sounds of OMD, to the psychedelics of Yoko Ono and Sean Lennon, into the orchestral Celtic breeze of The Cranberries’ Dolores O’Riordan, skipping into the rock and roll humor of Dweezil Zappa, driving into the experimental electronics of Sameer Gadhia (Young The Giant), Efterklang, The Dandy Warhols and The Cars’ Ric Ocasek, through the epic gangsta rap of Blondie’s Chris Stein, the haunting beauty of Placebo, the classical piano of Harry Waters (son of Roger Waters), and resting with experimental ambience from Eric Alexandrakis.

The vinyl only release will be out on Record Store Day on November 27 and today the trio has shared the first track from the album “Cryoblue Cheese O” mixed by Ric Ocasek on Pitchfork. Of the project Ocasek said, “The poem ALLEGORY OF A CAVE narrated by JOHN MALKOVICH sounded eerie to me, so I set it into that kind of musical landscape. The poem felt current, even though it was written around 380BC by PLATO. Only the ridiculers and weapons have changed as we move through time.”

The first release from this trio, Like a Puppet Show, is slated for Record Store Day/BlackFriday 2015, followed by two more releases to retailers, and direct to consumers via the web for the Christmas holidays. The first of many projects to be released by the trio, all of them are currently vinyl only, limited editions, featuring photographs of Malkovich by Sandro, and released on their Cryogenia π label. 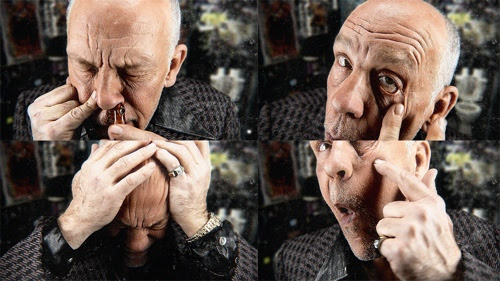