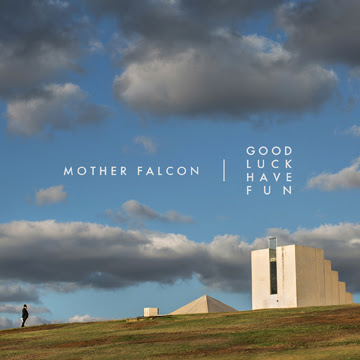 “ …soars with the grandiosity of Arcade Fire at its most anthemic.” – NPR

“Layering Beethoven-era orchestral elements with funky bass-lines and jazz-inspired horns, “Kid” features breathy vocals from Claire Puckett, who sounds like Stars’ Amy Millan — if she took up residence at the Blue Note.” – SPIN

Austin-based indie orchestra Mother Falcon will release their third full-length album,Good Luck Have Fun, on Universal Music Classics on October 9, 2015. This is Mother Falcon’s first release on UMC and marks the beginning of a new partnership, which includes plans to record and release a fourth album in 2016. The band has announced a co-bill fall tour with Louisville’s Ben Sollee that will bring their unconventional blend of orchestral and alternative influenced music to performing arts centers, theaters, and clubs across the country. “The Fall Migration” tour will bring together these two trendsetting artists of the progressive acoustic genre together for an evening of compelling and original music.

Mother Falcon is an indie orchestra formed in 2008 from a jam session of adventurous young cellists seeking an approach to their instruments beyond the standard classical training of their high school orchestra. Now also including violins, saxophones, trumpet, piano, accordion, banjo, guitar and bouzouki, the collective features twenty active rotating members. Mother Falcon also composes for theater, commissions composers and is active in music education. As an ensemble they have developed a unique curriculum for orchestra students under 18, taught during two sessions of their annual summer camp “Mother Falcon’s Music Lab.”

With the release of Good Luck Have Fun, Mother Falcon takes a leap into the unknown, blowing up their usual way of composing and recording together in a conscious effort to push themselves into new stylistic and sonic realms. Doubling down on both the accessible and adventurous sides of Mother Falcon, the first half of the album soars with an emphasis on rhythm, concise arrangements and a wealth of hooks. The second half of the album is comprised of experimental instrumental soundscapes.

Ben Sollee is an American cellist, singer-songwriter, and composer known for his innovative playing style, genre-bending songwriting, electrifying performances, and political and environmental activism.  A native Kentuckian, Sollee has composed for stage and screen at home and abroad. In partnership with the design group Public Works Collaborative, Ben helped create a massive eco-art and tech installation called Livestream.  The sculpture was recently awarded a grant from the NEA and will be installed this fall in Lexington, KY.  His upcoming record, Steeples, will see a return to the basic ingredients of Sollee’s music: cello, voice, and storytelling.