Rebirth of a Nation
Soundtrack Out Today 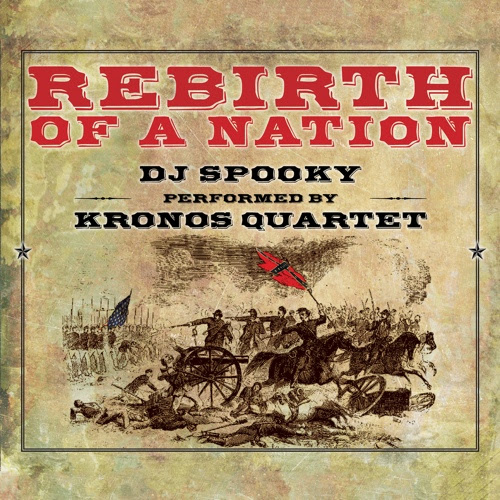 Scored by DJ Spooky and Performed by Kronos Quartet

Paul D. Miller is most well-known under his “constructed persona” of DJ Spooky That Subliminal Kid. He has recorded a huge volume of music and collaborated with a wide variety of musicians and composers, among them Iannis Xenakis, Ryuichi Sakamoto, Kronos Quartet, Pierre Boulez, Steve Reich, Yoko Ono, Thurston Moore and many others.

His latest release under the DJ Spooky moniker is the fully recorded score of the Rebirth of a Nation film, which is now available in physical and digital formats. The soundtrack is featured as a new release on Spotify and you can check out more information about the record here.

Conceived as a remix and re-imagination of director D.W. Griffith’s infamously racist 1915 silent film The Birth of a Nation, Rebirth of a Nation, recorded with Kronos Quartet, is a controversial and culturally significant project that examines how, in Miller’s words, “…exploitation and political corruption still haunt the world to this day, but in radically different forms.”

Originally commissioned in 2004 by the Lincoln Center Festival, Spoleto Festival USA, Wiener Festwochen, and the Festival d’Automne a Paris, the project was Miller’s first large-scale multimedia performance piece, and has been performed around the world, from the Sydney Festival to the Herod Atticus Amphitheater, more than fifty times. This year marks the 100th anniversary of the original film’s release, as well as the sesquicentennial of the end of the American Civil War, which Griffith also depicted in the film. Now, in 2015, and in the wake of tragic events that have sparked a national dialog on race in America, Rebirth of a Nation’s commentary is more relevant than ever.

“The Birth of a Nation focused on how America needed to create a fiction of African-American culture,” Miller told the Tribeca Film Festival in 2007. “It’s in tune with the fabrication of ‘whiteness’ that under-girded American thought throughout most of the last several centuries, and it floats out in the world of cinema as an enduring, albeit totally racist, epic tale of an America that, in essence, never existed.”

“We need now more than ever to see the context that early cinema offers us,” Miller says today. “As my old friend Saul Williams likes to say: Another World Is Possible. A remix of a film as deeply important and problematic as The Birth of a Nation reminds us that these issues still linger with us at every level.”

The DVD version of Rebirth of a Nation is from a new print that DJ Spooky uses specifically for live performances, with visual effects by PanOptic’s Gary Breslin and Adam Lewin. On August 28, Cantaloupe Music will release the film’s full soundtrack, which marks the first time the project’s entire score, recorded in San Francisco in 2007 by Kronos Quartet, will be made available on CD and digital streaming services, including Spotify. Artwork and packaging have been designed by the Brooklyn-based Cloud Chamber collective, and feature stills from the original film. Check out the full track list and media page link below.

Track List for the Rebirth of a Nation Soundtrack