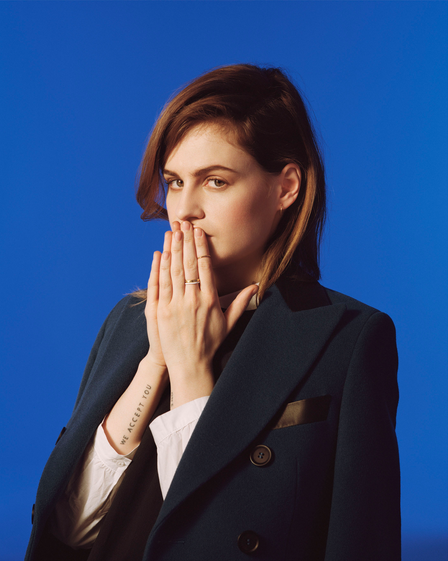 “Christine and the Queens is far from your average pop star, and she just might be a Michael Jackson for a new generation.” – V Magazine

Today, Because Music/Neon Gold/Atlantic recording artist Christine and the Queens releases a new “Tilted” (Paradis Remix) digitally and is on Soundcloud HERE. The duo Paradis explain: “What we loved the most about remixing Christine is the strength of her vocals, which were very inspiring from both a melodic and rhythmic point of view. We love what she represents right now in France, and we hope she can bring it in America too!”

Christine and the Queens earlier announced her live return to US in the Fall, touring North America with Marina and the Diamonds through California, Portland, Canada, Seattle, Salt Lake City, Denver, and ending with a double Terminal 5 show in New York. She made her eagerly anticipated network TV debut on NBC’s Late Night with Seth Meyers HERE. Additional live dates will be announced soon – for updates, please go to www.christineandthequeens.com/us.

Hailed worldwide as a visionary live artist, Christine was among the breakout stars performing at this year’s South By Southwest (SXSW) in Austin, Texas. From there, Christine and her band served as special guests on fellow Neon Gold recording artist Marina And The Diamonds’ west coast tour dates.

Christine and the Queens came together in London where the Nantes-born Letissier went after studying art and theatre. The artist – named in honor of Christine’s cross-dressing friends at Soho’s famed Madame Jojo’s drag bar – released a series of three EPS beginning in 2011, each one earning further attention and acclaim for her utterly individual brand of French-language freak-pop. Chaleur Humaine arrived in 2014 and immediately established Christine as a phenomenon, earning 4x platinum certification in just over a year and honors from the iTunes Store France. A US version of the album will arrive later this year.

Critical acclaim has flowed from major media outlets around the globe, including our own The New York Times’ T Magazine, which applauded Christine’s “androgynous style and herky-jerky choreography…is gunning for pop-music stardom that doesn’t depend on sex.” NYLON hailed Christine as “ridiculously stylish” while praising her “sophisticated art-pop” Huffington Post decreed Christine And The Queens as “the Next Big Thing at SXSW,” noting her mix of modern pop and killer choreography…all rock star swagger and MJ moves…seduces and slays in equal measure.” “The coolest French import since Brigitte Bardot,” raved Entertainment Weekly. “(Christine’s) electro-tinged pop has a smooth, rich vibe that combines the glitz of the ‘80s with the soul of the future. We can’t get enough.”

In addition, a range of superstar artists has publicly announced their fandom for Christine and the Queens. “I love her music,” avowed Madonna, “she’s cool. I like how she doesn’t seem to care, I love her style. She’s an incredible dancer.” “I think her voice is amazing,” says Mark Ronson. “I can see why she’s killing it. It’s exactly the sort of voice I like, it’s gravelly and has texture. The video is amazing too.” “The song that I really like right now…is called ‘Saint Claude,’” declared Lorde. “It’s got this beautiful music video, it’s really simple, the melodies are transcendent. I love it.”

Christine and the Queens live:

more dates to be announced 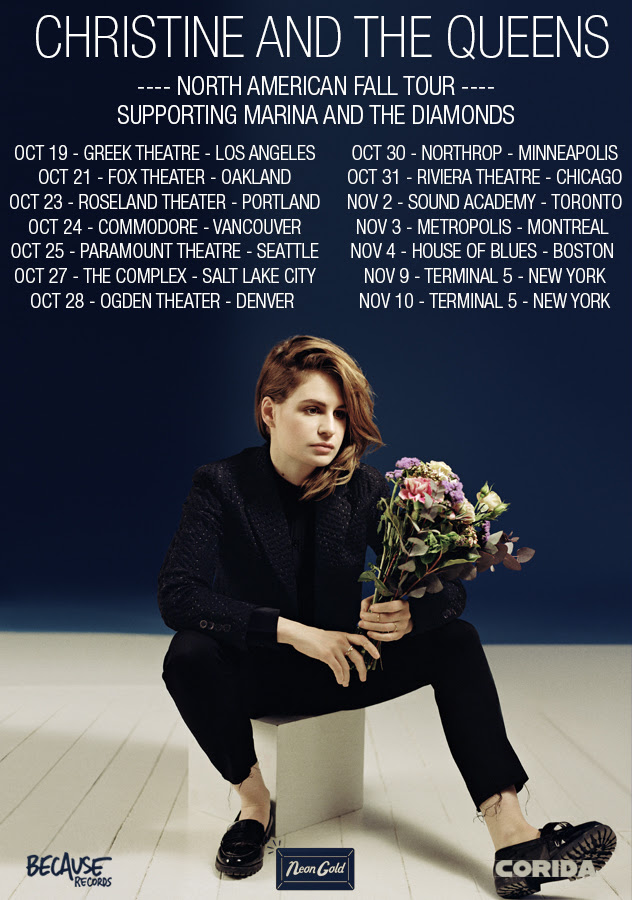