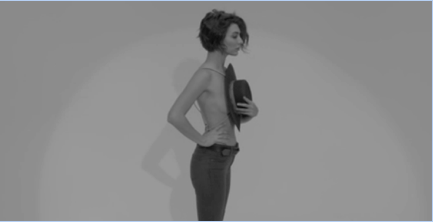 “Karmin’s Amy Heidemann is known for her stunning voice and remarkable talent to be able to recreate the most rapid, tongue-twisting verses of prominent rappers. – Paste

“We absolutely LOVE Karmin, and that’s probably because listening to them is like having someone make sweet sweet love to our ear drums!” – Perez Hilton

Exposure is nothing new to Karmin, the pop duo consisting of Amy Heidemann and Nick Noonan. Their double-platinum hit “Brokenhearted” off their 2012 EP Hello skyrocketed the band, catching an appearance on Saturday Night Live, accolades from Diplo, Questlove, and The Game, and a Rolling Stone cover, even as they continued their pop conquest with more singles that followed. But with their LP Leo Rising out soon, the two broke off from Epic to have complete creative austerity of their music. And with their new lyric video for “Didn’t Know You,” Amy Heidemann is more exposed than ever, defiantly showing herself as sexy and confident, a theme that rings true for the new album.

Karmin tells Billboard, the song “Didn’t Know You” is a story of betrayal. We wanted the listener to feel the passion and energy in the story so we built it on a driving bass line with a syncopated drum groove which opens up to a full rhythm section of aggressive, pissed off drummers.  We hope you love it, we made it for you!”