Twenty three years after its original release, and over 20 years since Uma Thurman famously lip-synced to the Urge Overkill cover of “Girl, You’ll Be A Woman Soon”, Touch and Go Records is pleased to reissue the long out-of-print Urge Overkill Stull 10″ vinyl EP on October 30, 2015! And, yes, the version of “Girl, You’ll Be A Woman Soon” on the Stull EP is the same version used by director Quentin Tarantino in the 1994 cult classic Pulp Fiction.

With their gold medallions polished and maroon velvet blazers fresh from the cleaners, UO recorded the Stull EP with legendary producer Kramer. Released by Touch and Go Records in 1992, the Stull EP is an eclectic collection of songs and musical styles that explore the themes of death, darkness, the depths of the Chicago music scene, the joy of vinyl and style – with a soon-to-be-international-hit “Girl, You’ll Be A Woman Soon” leading the way. 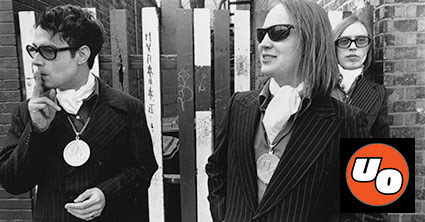 “Girl, You’ll Be A Woman Soon“: Huge Neil Diamond fans, we recorded this cover with producer Kramer. It was later found by Quentin Tarantino at a record store in Amsterdam. His use of the song in the infamous Uma Thurman overdose scene in Pulp Fiction resulted in our version becoming an international hit.

“Stull (Part 1)“: This song was inspired while passing through Kansas on tour. Stull, Kansas, is the home of an abandoned church said to be one of the Seven Gates of Hell. To celebrate the reissue of the Stull EP, we will play Kansas City, Missouri, on release day October 30th – just 40 miles west of the album’s namesake town.

“(Now That’s) The Barclords“: An ironic boast of a fictional Rat Pack, the Barclords. We played a secret show as the Barclords, at the legendary Lounge Ax Club in Chicago. The Barclords is a sort of alter-ego for us. This song was released as the A-side of a limited edition 7” as part of the Sub Pop Singles Club.

“What’s This Generation Coming To?“: Celebrating vinyl, a song foreshadowing the era where vinyl was disappearing as compact discs were on the rise. This reissue celebrates the reversal of that trend.

“Goodbye to Guyville“: Summoning the ghost of Otis Redding, we paint an elegiac tone poem to the bleak male-dominated Wicker Park art scene we yearned to transcend. “Guyville”: coined by us and subsequently used by Liz Phair in her debut album title Exile in Guyville.

Urge Overkill was created in 1984 by Minnesota natives Nash (National) Kato and King Roeser, both multi-instrumentalists. The duo met at a Big Black show on Northwestern University’s campus. They were accompanied by a revolving cast of drummers over the first several years and released their Touch and Go Records debut, the Wichita Lineman 7″, in 1987.

Recorded by Steve Albini and released in 1987, the band’s first full-length album, Jesus Urge Superstar, was as quirky as the name suggests and full of promise of the things to come. Urge Overkill’s 1990 follow up album, Americruiser, recorded by Butch Vig, won them many new fans – playfully combining sarcastic commentaries on American culture while showcasing the band’s expert skill in composing carefully-crafted “top 40 rock anthems.”

Prior to entering the studio with Steve Albini again in 1990, the band added Blackie Onassis as their permanent (for a while, at least) drummer and produced their most accomplished album – The Supersonic Storybook. If the mechanics of the collective Urge Overkill subconscious were to be transmigrated into music, The Supersonic Storybook would be it. Following the album’s release, Urge headlined many magical shows and rocked with the likes of Nirvana, Mudhoney, Dinosaur Jr., and Pearl Jam.