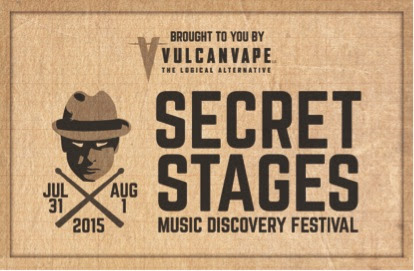 “Instead of the sprawl of City Stages, Secret Stages carefully curates acts on the rise throughout a variety of genres, united, more than anything else, by a prevailing sense of good taste.” – WELD

“Secret Stages is already a far, far better music festival than anyone dreamed it might be.” – Black & White

Birmingham is an exciting place for music these days. We’re seeing better venues, more incredible artists, and a lot more eager music fans. Secret Stages aims to stoke the fires of this music renaissance for years to come. The impetus for Secret Stages was simple. Some like-minded folks who love music, live music specifically, decided that Birmingham could use a new type of music festival. All of the staff has had their hands in the music industry pot in some fashion or another, whether it be as performers, writers, promoters, engineers, etc. It quickly became their focus to have an event that celebrated incredible music that hadn’t reached a wide or mainstream audience.

The new internet driven music industry has leveled the playing field for artists in a number of ways. It is now easier than ever to make your music available to a world wide audience. This has also made the sheer volume of available music almost unnavigable. But, in that vast sea of hungry bands there are some truly incredible artists. Secret Stages searches year round for great and unique talent to showcase at the festival, and work to bring the bands a new and fertile audience as well as to bring new music to awaiting fans. Intimate venues, great sound, and hot August nights all combine to create an atmosphere that is ripe for electric performances and music discovery.

Secret Stages also strives to be a contributing member of the community, working closely with Scrollworks Youth Music School, a non profit organization dedicated to providing an education in music to area children who might not otherwise have that opportunity. The festival donates 20% of its profits to them and work with them on other fundraising initiatives.