BRAID ANNOUNCES NORTH AMERICAN DATES WITH
THE GET UP KIDS, FESTIVAL APPEARANCES AND JAPANESE TOUR
CRITICALLY-ACCLAIMED NEW ALBUM, NO COAST, AVAILABLE IN STORES
AND ONLINE NOW VIA TOPSHELF RECORDS
“A blueprint for the elder statespersons of emo returning
to the fold” – NPR All Songs Considered
“The kind of album you’d expect out of Braid if they kept going after ‘Frame & Canvas’ and learned how to adjust with age.” – Pitchfork
STREAM: “KIDS GET GRIDS” (VIA THE FADER)

Seminal indie-rock band Braid have announced more North American dates, festival appearances and a Japanese tour. Beginning on June 29 in Tokyo, Japan, Braid will perform two nights at Sibuya O-East with American Football before its run that will include stops in Nagoya (July 2), Kyoto (July 3), Osaka (July 4), Shibuya (July 5) and Shindaita (July 6). Following the Japanese tour, Braid will be making appearances throughout the month of August alongside The Get Up Kids, Beach Slang,Prawn and Dikembe. A full listing of dates can be found below and more information on tickets can be found on Braid’s official website: http://www.braidcentral.com. Since its inception in 1993, Braid released a number of compilation songs, 7″ material and full-length albums that are still regarded as indie-rock benchmarks. 1998 was the defining year for Braid. The band played almost 200 shows that year, toured Europe twice (first with The Get Up Kids then with Burning Airlines), and Polyvinyl Record Co. released Frame & Canvas, the quintessential Braid album, recorded and produced at DC’s Inner Ear studios with J. Robbins. The record was released in April 1998 and met with more success than neither Braid, nor Polyvinyl, had ever imagined. The band would part ways shortly thereafter in 1999, spawning additional projects and incorporating other musicians to their respective projects.

In mid-2010 the members of Braid – Chris Broach (guitar/vocals), Bob Nanna (guitar/vocals), Todd Bell (bass), and Damon Atkinson (drums) – discussed the possibility of working on a new release as well as performing a number of reunion shows that eventually led to their Closer To Closed EP and their Frame & Canvas tour in 2012 where they performed the album front-to-back in addition to a number of fan favorites. This burst of activity was a welcome return for the band that’s also made fans excited for what was possibly next beyond the release and brief stint.

After a number of months of writing and a recording session with notable producer Will Yip, Braid released No Coast in 2014, its 16-year return in full-length form that was praised extensively by the likes of major North American outlets such as NPR, USA Today, Entertainment Weekly, ABC News, Pitchfork, SPIN, Stereogum, Paste, The AV Club, Alternative Press and many more. The album represented more of a rebirth of the band than a simple reunion and, as guitarist/vocalist Bob Nanna states, is just a small taste for what’s to come from these four musicians who are continuing to leave an indelible mark on indie music. “The drive has always been there to create new, exciting material that would speak to all of our fans, old and new,” he says. “We’re excited with how the record turned out and look forward to Braid’s busy future.”

Braid will be making the following appearances this summer. Dates below. 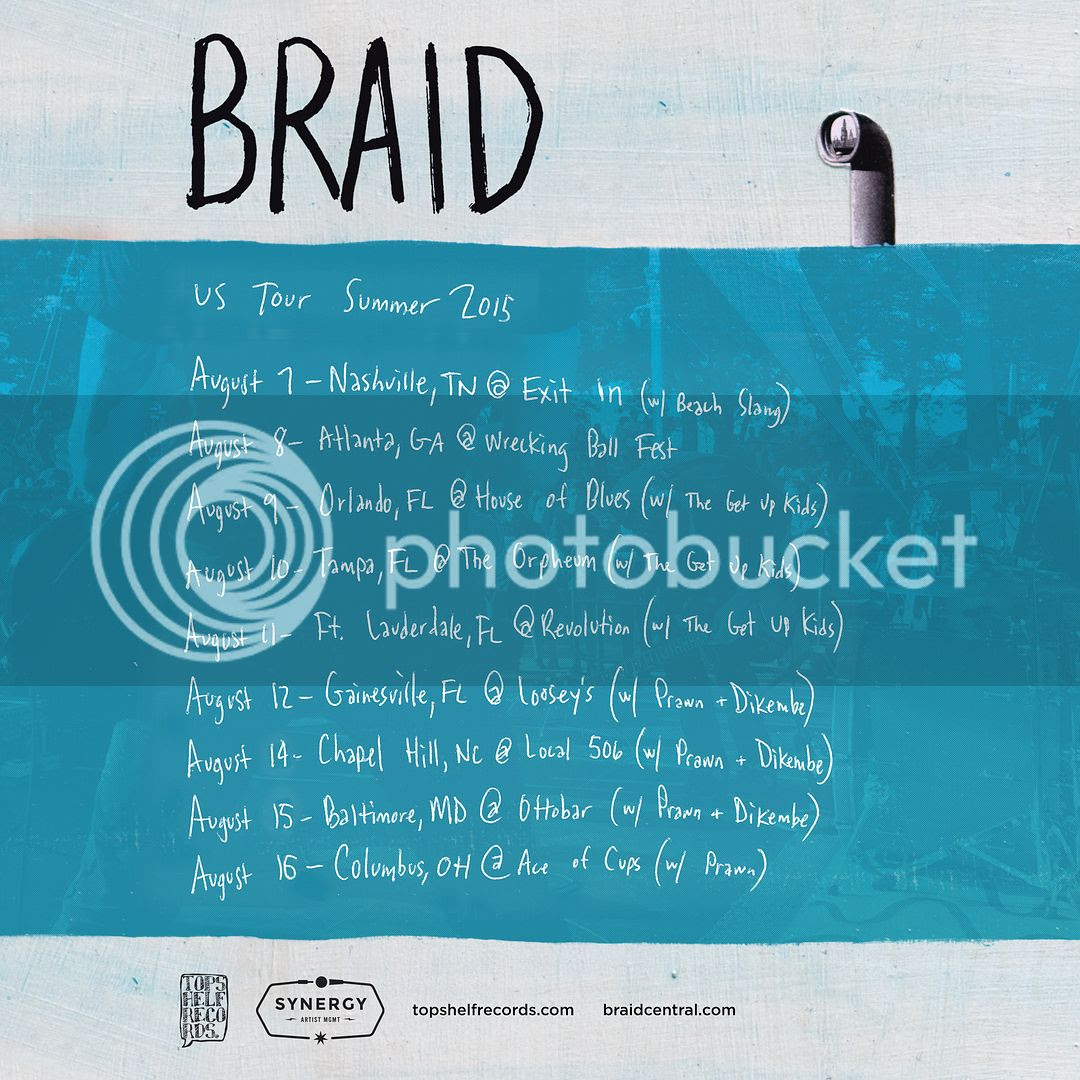