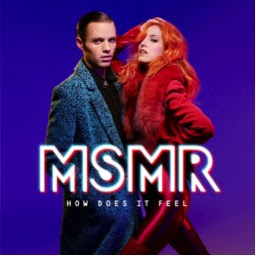 Last week, MS MR (Lizzy Plapinger and Max Hershenow) announced the release of their sophomore album—How Does It Feel available Friday, July 17 via Columbia Records—and to celebrate, the music duo has just unveiled details of their North American/European fall headline tour. Kicking off September 24, the How Does It Feel Tour crisscrosses the US and Canada, including a stop at NYC’s Terminal 5 on October 8 and wrapping with an October 27 performance at Los Angeles’ Wiltern Theatre before hitting Europe in November. Supporting acts include Circa Waves, Jack Garratt,VÉRITÉ, Crater, Tigertown and more. See below for full touring details, including festivals stops this summer around the globe. Tickets go on sale starting Thursday, June 4 at 10am local time for Los Angeles, with all other dates on sale Friday, June 5. Watch the band’s tour announce video, created under the direction of acclaimed photographer/filmmaker Luke Gilford, here: http://smarturl.it/HDIFTour.

Throughout their fall tour, MS MR will be donating a portion of every ticket sold to an inspiring organization, Third Wave Fund. “We’re thrilled to be able to contribute a portion of ticket sales from the How Does It Feel Tour to Third Wave Fund, a grassroots fund that supports feminist, queer and trans-rights organizations,” said Lizzy and Max. “A deep-seated belief in equality, self determination and equal opportunity is at the root of our ethos as a band, and we feel we have a responsibility to bring attention to organizations that work towards those causes. Please read up on the important work TWF is doing in communities around the country and get involved at www.thirdwavefund.org.”
Watch MS MR’s new video for the album’s lead single “Painted,” inspired by Kubrick and the 70s documentary The Secret Life of Plants here: http://smarturl.it/PaintedVid. “Painted” is currently Top 30 at Alternative radio, led by Sirius XM Alt Nation, Radio 104.5/Philadelphia, 96.5 The Buzz/Kansas City, CD 102.5/Columbus and many more.