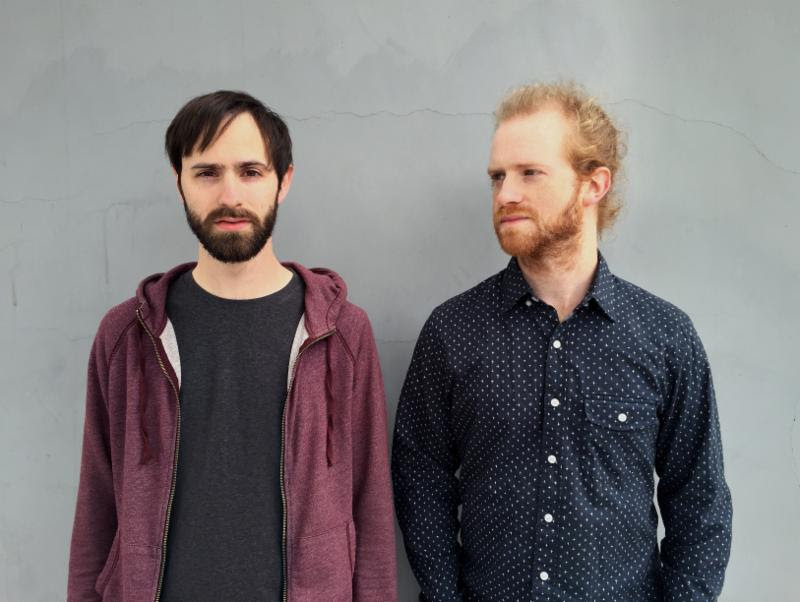 LA based duo yOya share their latest offering “The Heartwood” set for release on May 26th from New Professor Music. The track premiered on Consequence of Sound who says, “The tender number opens with gentle synth drones behind Alex Pfender and Noah Dietterich’s fragile harmonies. But even as acoustic guitar strums keep things anchored in a folk tradition, looping 808s interplay with beams of gentle electronics to form an atmosphere befitting simultaneously a cabin high in grassy hills or a rooftop overlooking a gleaming city.” yOya also announced a short west coast tour which will include with Phox and Tino Drama.
“The Heartwood” is a diffuse, guileless story of new love growing from the remains of the old. Under a canopy of shimmering keyboard layers and framed by looping drums is a series of sketches evoking languid tenderness and simple pleasure. We hear nascent, plaintive desire in the refrain, “when are you coming back?” and feel the rush of emotion in a chorus full of indistinct delight.  “The track glides easily until the final chorus erupts like dawn through the trees.
yOya is the project of longtime songwriting partners Alex Pfender and Noah Dietterich. Natives of Corvallis, Ore. and friends since the fifth grade, Pfender and Dietterich grew up to the sound of rain in the fir trees and ‘Graceland’ on cassette. When the duo moved to California to study music they found themselves semi-consciously absorbing the electronic sounds of the LA scene. What emerged was yOya’s unique mix of folk-hearted songs, intricate vocal harmony, gritty synths, and thundering electronic beats.
With a full-length album, an EP, and several singles to their name, yOya has toured extensively through the United States, sharing stages with Phox, Bleachers, Dawes, RJD2, Moses Sumney, Avi Buffalo, and many others. They have also made appearances at SXSW and CMJ Music Marathon.
Last year yOya opened their biggest shows to date with their biggest sound to date. Featuring live drums for the first time, their supporting sets (for Moses Sumney, Bleachers, and Phox) showed a bolder and more dynamic side of their folk-rooted sound.
On their new singles, yOya brings that energy to the studio with drummer Ian Meltzer. The three worked together to integrate Meltzer’s technical style into the band’s non-standard electronic grooves, and quickly found that his playing brought extra range and creativity. “We were so used to performing and recording as a duo, it’s really been a big shift for us. Not just the live drums on the track and on stage, but a third person in the room,” Dietterich explains.
The band turned to producer Jon O’Brien (White Denim, Young The Giant) to shape the interplay of electronic and acoustic drums. His mismatched four-piece kit became the backbone of a mix full of deep 808s and sparkling Juno 60 pads. The change in instrumentation also sparked a change in attitude. “We’re learning to be a little less precious about things,” says Pfender. “On our last EP it was all about making the most detailed, full arrangements possible. With these songs we were looking for a more immediate sound.”

yOya will head out on a short tour performing “The Heartwood” and other favorites. All upcoming show are below.
UPCOMING TOUR DATES:
05.21 – San Francisco, CA @ Amnesia
05.26 – Portland, OR @ Mississippi Studios *
05.27 Vancouver, BC @ Biltmore Cabaret *
07.11 Los Angeles, CA @ Pasadena’s Centennial Square for Eat|See|Hear presents “Back To The Future”

For the latest tour dates and more information on yOya visit: