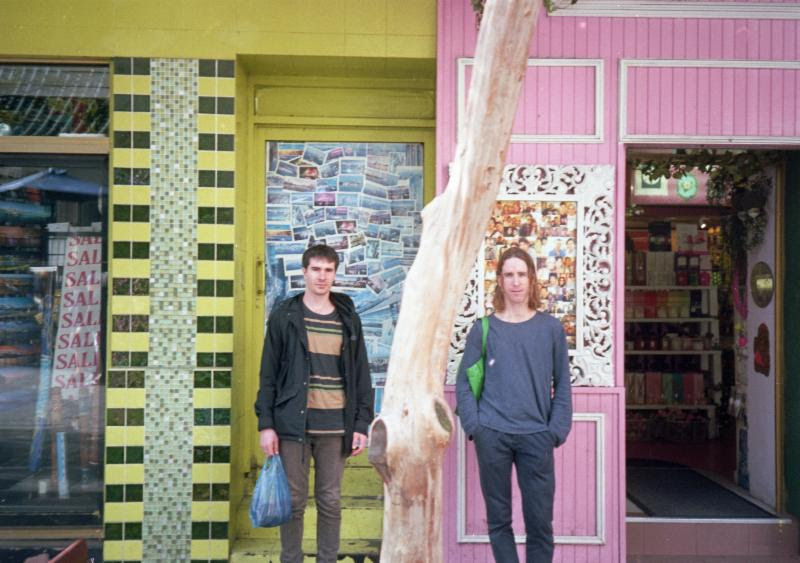 Photo Credit: Mitchell Grant
Stream: Jane’s Lament via Consequence Of Sound or
SoundCloud
Watch: “Sun” video via The 405 or YouTube

“The songs each set their spaced-out melodies and textures against body-moving rhythms,

at their grooviest.” – Stereogum

“Au.Ra effortlessly strike a balance between dreamy and atmospheric guitar rattles, and
just the right amount of reverb…the Australian duo construct what feels like worldly guitar
pop, with a lackadaisical exuberance that lifts you up and carries you away into
it’s brightness.” – The Line Of Best Fit “… psychedelic dream-pop with just the right mix of analogue and digital vibrations..” – Prefix “Anyone who can audibly make their guitars sound like extensions of their own body and mind is good in our books.” – This Is Fake DIY
Sydney’s Au.Ra, a duo composed of Tim Jenkins and Tom Crandles, released their debut album Jane’s Lament on Los Angeles label, felte. Jane’s Lament, a work which carefully envelops the listener in dreamy hues of sound, is streaming in full is available now on CD, LP and digitally in felte’s webstore. The band has just announced a west coast tour that will include shows in Los Angeles, San Francisco, Portland and Seattle. All upcoming shows are listed below.

Made over the course of two years, the Jane’s Lament was birthed from improvised jams the pair play over droning guitars and looped drum beats. Tracks like “Sun,” and “Pyramid” emerge slowly out of interplays between simple melodies and layered, reverbed instrumentation.

Au.Ra’s “emotive soundscapes” perfectly encase their non-traditional pop songwriting, like on highlight “Morning,” where shimmering guitar riffs transport you to a serene, meditative realm. Their repetitive lyrics belie this easy transcendence, sometimes even verging on incantation. These songs evoke a languid drive along a bending highway in autumn, the scenery and light shifting.