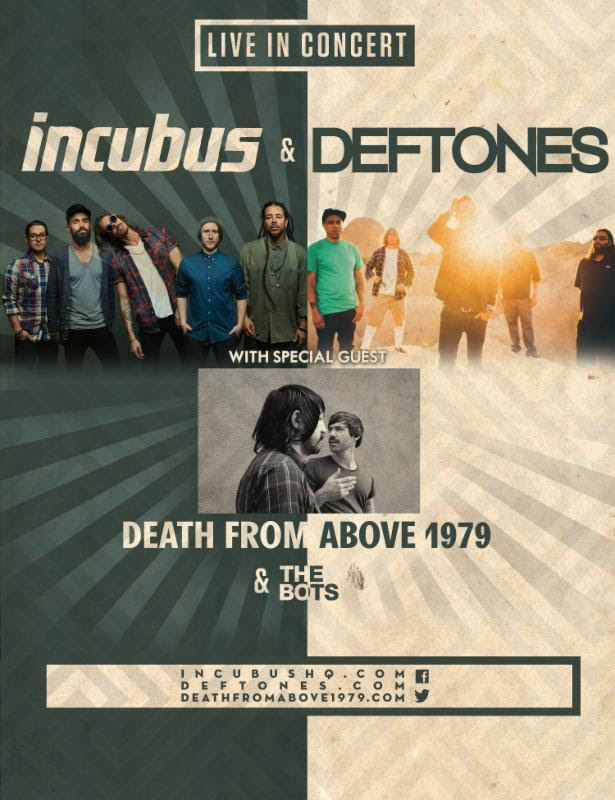 LOS ANGELES (April 16, 2015) – Alternative Rock heroes, Incubus and Deftones, announced today they will set out on a co-headlining summer tour visiting nearly 20 cities throughout the United States with more to be announced. The tour, produced by Live Nation, will kick off on July 22 at the DTE Energy Music Theatre in Clarkston, Mich. and take the two bands to New York City, Chicago, Boston, Houston, Dallas and more before wrapping up on August 30 in San Diego, Cali. Death From Above 1979 and The Bots will join the tour as special guests. Tickets go on sale beginning April 24 at www.livenation.com.

Multi-platinum alternative rock heavyweights Incubus recently signed with Island Records, and will release 4-song EP entitled Trust Fall (Side A) on May 12. After nearly two years off the grid conceptualizing and recording new material, Incubus, under the management of Johnny Wright at Wright Entertainment Group, has its sights set on a “non-traditional” album in 2015.  Founding member Mike Einziger told Billboard.com that although the band didn’t have “any plans of making this record” the new music is “pretty indicative of where we are now. This is what the band sounds like in 2015.” The EP’s digital pre-order is available on iTunes, and the CD and vinyl versions of the EP can be pre-ordered now HERE. Twenty years since the release of their indie debut album in 1995, Fungus Amongus. Incubus went on to release six studio albums (the last three produced by Brendan O’Brien), achieving RIAA Gold, Platinum and multi-Platinum success; as well as five live albums. Four of their songs have hit #1 on the Billboard Alternative Songs chart, including “Drive” (2000, also Top 10 Pop), “Megalomaniac” (2003), “Anna Molly” (2006), and “Love Hurts” (2008).

Since Deftones’ inception, the multi-Platinum, Grammy Award®-winning alternative rock band from Sacramento, Cali. have quietly been pursuing two paths, delivering songs defined by churning, double-fisted aggression while also testing the boundaries of music by incorporating elements of psychedelia and shoegaze. The Los Angeles Times wrote of Deftones, “Hard rock thrives on conflict and chaos, and no band has found more beauty and soaring aggression within those ingredients than Deftones.”  The band’s seventh studio album Koi No Yokan, released in November 2012, spawned two Top Five hits at Rock radio (“Tempest” and “Swerve City”). Koi No Yokan met with critical acclaim with Revolver naming it their “Album of the Year” and SPIN selecting it as one of its Top 50 Albums of 2012. The New York Post also hailed it as “one of the best rock albums of the year.” Deftones have released seven albums to date and have sold over 10 million albums worldwide. Vocalist/guitarist Chino Moreno, guitarist Stephen Carpenter, keyboardist/samplist Frank Delgado, drummer Abe Cunningham and bassist Sergio Vega, are currently working on their eighth studio album to be released in 2015.

Globally revered and highly influential dance-punk duo Death From Above 1979 are touring in support The Physical World released by Last Gang Records/Warner Bros. Records this past September.

Produced by D. Sardy (Red Hot Chili Peppers, LCD Soundsystem, Wolfmother, Oasis), The Physical World comes a full ten years after the release of the band’s universally acclaimed debut album, You’re A Woman, I’m A Machine, which made Jesse F. Keeler (bass, synths, backing vocals) and Sebastien Grainger(vocals and drums), an underground / overground sensation. DFA 1979 broke up in 2006 while the first album and subsequent remix album continued to sell inexplicably. They decided to reunite in 2011 and began to perform live picking up where they left off without missing a beat. Their rabid cult has only continued to amass just as inexplicably. “Returning a decade later, they’re still crushing violent, angular riffs, but they’re also writing catchier songs. A throwback to a throwback that better the second time around.” – Rolling Stone Magazine

Special guests include Death From Above 1979 and The Bots

All dates, cities and venues below subject to change.

All shows on sale April 24 unless otherwise noted.