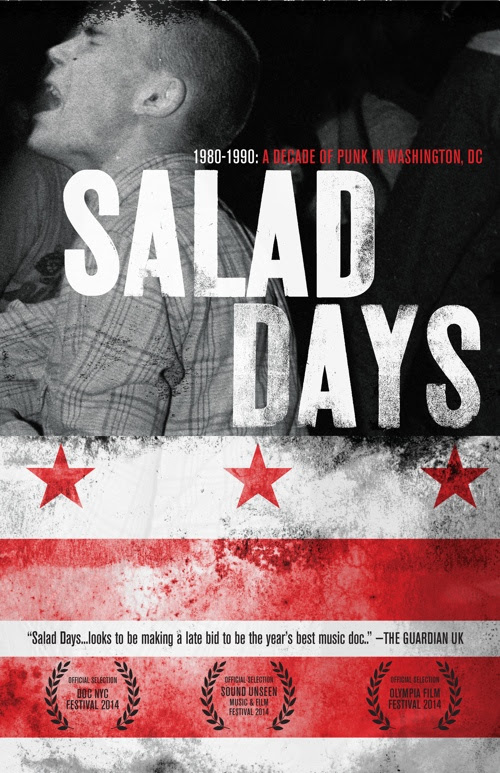 “…provides a solid, borderline exhaustive survey of the Washington, D.C., hardcore punk scene of the 1980s — possibly the nation’s most influential such milieu” – Variety

“The documentary is as much an historical document as it is an informative and entertaining overview on the rise of D.C. hardcore and its lasting influence.” – Billboard

“…jam-packed with glorious and grainy live footage, still photography, and incendiary music from a broad range of acts” – Chicago Reader

Filmmakers Scott Crawford and Jim Saah will be screening their critically acclaimed documentary Salad Days: A Decade of Punk In Washington, DC (1980-90) for a week at the IFC Center in New York City. Kicking off the residency with a sneak peek screening plus Q&A on April 16, the film will play from April 17 through April 23.

Over four years in the making, Salad Days wrapped production last year and is now appearing in cinemas across the country as part of its limited release. So far the film has sold out screenings in Los Angeles, San Francisco, Boston, Seattle, Chicago, and more.Salad Days is slated to make more stops in various cities across the US so be sure to check out the screening dates below.

Watch the trailer below:

Salad Days: A Decade of Punk in Washington, DC (1980-90) is a documentary film that examines the early DIY punk scene in the Nation’s Capital. It was a decade when seminal bands like Bad Brains, Minor Threat, Government Issue, Scream, Void, Faith, Rites of Spring, Marginal Man, Fugazi, and others released their own records and booked their own shows—without major record label constraints or mainstream media scrutiny. Contextually, it was a cultural watershed that predated the alternative music explosion of the 1990s (and the industry’s subsequent implosion). Thirty years later, DC’s original DIY punk spirit serves as a reminder of the hopefulness of youth, the power of community and the strength of conviction.

Director/writer Scott Crawford is a music journalist, musician, and graphic designer. As a teenager in the DC suburbs, he started a fanzine called Metrozine that documented much of what was happening in the DC hardcore punk scene in the 1980s. “The DC punk music scene that I grew up with in the 1980s has always been a big part of who I am,” says Scott. “I interviewed a lot of these bands for the first time over 30 years ago while doing a fanzine. Approaching them all again decades later offered a type of perspective and reflection that I wanted to capture in a film.”

Scott Crawford was also quoted in both Dance of Days and Banned in DC—the two most definitive books on the early DC punk scene. In 2001, he launched Harp Magazine and served as its Editor-in-Chief for over seven years. Crawford also launched the online music portal Blurt in 2009.

Serving as Director of Photography, Jim Saah is a native of Washington, DC who has worked professionally in photography and video for over 25 years. He has shot for a variety of publications and websites ranging from the Washington Post to Rolling Stone. He’s also an experienced videographer whose credits range from union organizing films to music documentaries. Recent films he has worked on include movies about the bands Wilco, Death Cab for Cutie, and Eddie Vedder.