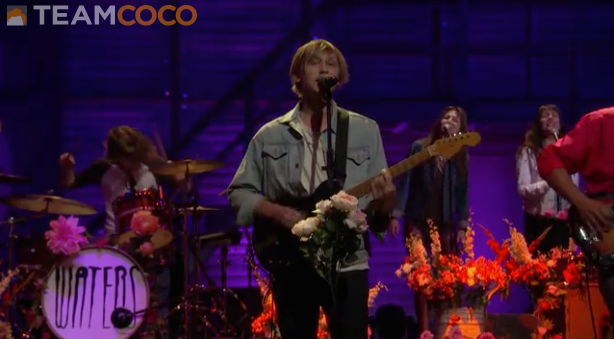 “..one of the most electrifying pieces of power pop I’ve heard in a while.”- Stereogum

“ WATERS nails marrying a big sound with a big heart…”-KEXP

WATERS’ highly anticipated new album and Vagrant Records debut, What’s Real, will be released everywhere on April 7. Serving as a follow up to 2011’s Out In The Light, and 2014’s It All Might Be OK EP, What’s Real is comprised of eleven honest and raw tracks reminiscent of alternative rock stalwarts of the 90’s.  Today, you can stream the record in its entirety on Billboard.com

Recorded over a 15-month period with Grouplove producer/drummer Ryan Rabin as well as producer Carlos De La Garza (Paramore), What’s Real is the perfect juxtaposition of songs that sound and feel big, all the while being incredibly personal and brutally honest. In celebration of the album’s release next week, WATERS performed the album track ‘Got To My Head’ last night on Conan, their first ever TV performance. If you didn’t catch it, watch it here: http://teamcoco.com/video/waters-04-01-15

WATERS has spent the last six months on the road with the likes of Tegan and Sara, Cold War Kids, Smallpools, Magic Man and Weezer to name a few. In support of What’s Real, WATERS will be touring with Matt & Kim throughout April and May. A full list of dates can be found below. “Come to our shows. Participate in the energy. We will leave it all on the table. We expect the audience to as well. It’s what I dreamt about when I was 14 and started playing guitar. It’s what I still dream about today. It’s What’s Real.”- Van Pierszalowski